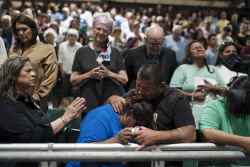 My sister is a teacher in America, which means she has had to teach her fourth grade students about how to defend themselves against people who might walk into her public school with guns. Once, during a false alarm, her class followed the "safety protocol" they had learned. What did these children do to protect themselves from the shooter they thought was in the building? One boy wielded a peanut butter jar. Another: Purell. A student with a broken leg held up his crutch. My sister crouched behind her desk and told them they were doing great.

Conservatives Are the New 'Good Germans'

Thou Shalt Not Criticise St Meghan