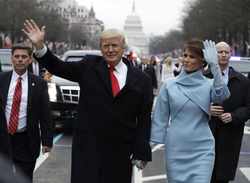 Before pulling off a surprise victory in 2016, Donald Trump had been eyeing a presidential run for at least two decades. In 2000, during a brief foray into seeking the Reform Party nomination, the then-real estate developer touted Oprah Winfrey as his ideal running mate.
From 2004 to 2008, Trump shifted his political affiliation from Republican to Independent to Republican, then became a self-proclaimed Democrat while at the same time supporting Sen. John McCain’s run for the White House.
And the “Make America Great Again” slogan? It was first used in the 1980 Reagan-Bush campaign before…

A Great Day for American Democracy