The city of Nashua, NH is in some hot water over a flag dispute that mirrors a similar set of circumstances as the Shurtleff vs. City of Boston flag-flying case. 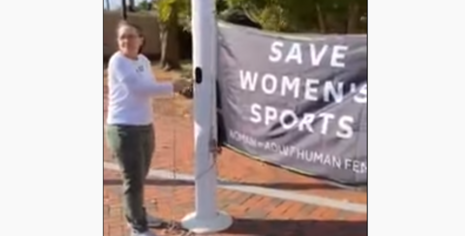 On October 10, 2020, Beth Scaer and her husband raised a flag sponsored by the organization “Save Women’s Sports” on the city’s Citizen Flag Pole, a place where different communities could raise a flag that promoted a certain group’s values. The flag read “Save Women’s Sports, Woman = Adult Human Female,” and was supposed to fly for 6 days.

Now the flag’s message should be considered common sense, but in today’s world, that second line is especially troublesome for people that lack common sense.

That is why Nashua Mayor Jim Dochess had the flag removed less than a day after it was hung because he deemed it was offensive and “violates state law.”

The state law of what? Truth and reason? Thinking logically?

Nearly two years later, Scaer is still trying to get her flag back up. Shortly after the flag was taken down, the city of Nashua issued a response to Scaer in which it highlighted the Shurtleff case as precedent for a city’s right to control what flags are flown and which aren’t. But Scaer argued that since the Supreme Court voted against Boston’s actions, Nashua should also allow her to fly any flag (which is a valid point).

Attorney Richard Lehman has sent a request to Nashua City Attorney Steve Bolton on behalf of Scaer requesting that she be allowed to put the flag back up. While the city still has not officially owned up to the stupidity of its decision, it has taken down the “Citizen Flag Pole Program” page from the city’s website, which is where groups of people request that they put their community’s flags up (this means that the city’s gay pride flag-raising event has also been canceled).

This is a half-victory for Scaer, but the long-term result for her and her husband is to simply be allowed to fly their flag. After all, if the first amendment allows for free speech, then why is Scaer’s view being censored while others are being amplified?