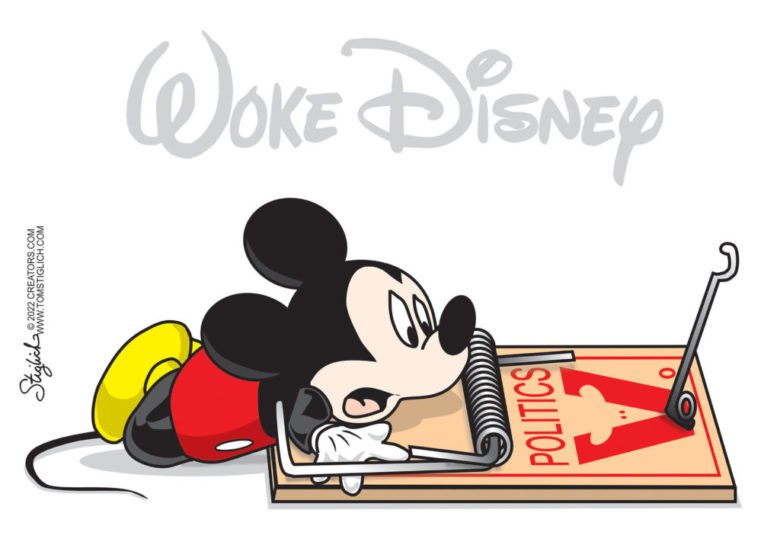 Corporations previously outspoken about hot-button social issues have stayed quiet on the likely overturning of Roe v. Wade after a dramatic fight between Disney and Florida Republican Gov. Ron DeSantis over the company’s political activism.

Following the leak of a draft opinion indicating the  Supreme Court is likely to overturn Roe v. Wade, Democrats are trying to ram through a bill legalizing third trimester abortions; however, corporations are largely staying out of the fray, following Disney’s disastrous battle with Republican Florida Gov. Ron DeSantis that ended with the company losing its special tax privileges.

Statement from The Walt Disney Company on signing of Florida legislation: pic.twitter.com/UVI7Ko3aKS

CNBC and Fortune contacted dozens of the largest corporations in the U.S., but few of them gave any comments about the landmark case.

Disney has not commented on the draft opinion, nor have American Airlines, Walmart, Facebook, Microsoft or Comcast, according to CNBC, though all of the companies have been outspoken on politics and social issues in the past.

Zeno, a massive public relations firm that advises Coca-Cola, Hershey’s, Salesforce, Netflix and Starbucks, advised its clients not to comment on the overturning of Roe, according to Popular Information, citing a client memo.

“Do not take a stance you cannot reverse, especially when the decision is not final. This topic is a textbook ’50/50′ issue. Subjects that divide the country can sometimes be no-win situations for companies because regardless of what they do they will alienate at least 15 to 30 percent of their stakeholders,” Zeno told clients, according to Popular Information. “Do not assume that all of your employees, customers or investors share your view.”

Women’s rights are under attack again, this time in Oklahoma.

We believe transportation should never be a barrier to a woman’s access to healthcare. 💗 pic.twitter.com/QyywcyjdMg

Several companies that came out against the 2021 Texas Heartbeat Act, which bans most abortions at around six weeks, have been silent on the leaked draft opinion, including Lyft, GoDaddy, Glossier, Patagonia and Madewell.

The United Parcel Service (UPS) reportedly donated to Rise Up for Abortion Rights, a pro-abortion group that is targeting churches this Mother’s Day with protests, according to Fox Business. UPS has not made a public statement on the likely end of Roe and did not respond to the Daily Caller News Foundation’s request for comment.

#RoeVWade being overturned is unacceptable. OkCupid has proudly supported reproductive rights for years, and we’re not stopping now. Gender equality is at stake and more brands need to step up. Tag a brand you want to see take action and sign https://t.co/vNANqnhBL4.

Match Group, which vocally supported abortion rights in the past, has been silent on the likely overturning of Roe, although OkCupid, which Match Group owns, called the development “unacceptable” in a Tuesday statement.

DeSantis stripped Disney of its special administrative zone and accompanying privileges in April after the company came out against a bill banning classroom instruction on gender identity and sexuality for young children. CEOs across the country then strategized about how they could avoid becoming the “next Disney,” according to The Wall Street Journal, and have so far largely steered clear of this week’s groundbreaking abortion news.

‘Undoctrinate’ Your Kids: Pushing Back Against Classroom and Campus Propaganda