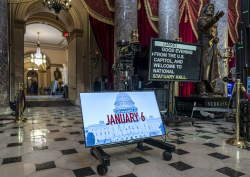 Remember when we all thought we knew what a coup was? “A sudden, violent, and illegal seizure of power from a government,” as defined by Google’s Oxford dictionary. From the French coup d’etat, literally “blow of state.”
That’s what it was then, but now a coup is when legal means are used to counter a perceived attempt to seize power through subterfuge and electoral manipulation. Huh? That doesn’t make any sense.
No it doesn’t, but it’s the narrative being pushed by the far-left media and the inbred governing elites, who have essentially turned language into a weapon against those who would…

The Growing Threat of a World Run by Dictators

The Science! of Infant Formula