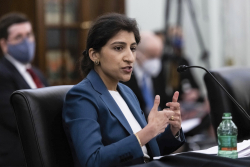 Last summer, President Biden signed 72 executive orders to regulate virtually every major industrial sector to protect the American people from excessive market concentration.
“What we’ve seen over the past few decades is less competition and more concentration that holds our economy back,” the president said. “Rather than competing for consumers, they are consuming their competitors. Rather than competing for workers, they’re finding ways to gain the upper hand on labor.”
The president’s actions were a culmination of claims by liberal economists and progressive scholars to sound the alarm…