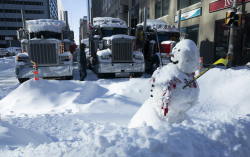 Canadian Prime Minister Justin Trudeau has embarrassed himself and his government with his response to the Freedom Convoy, and however it ends now, there’s no way for him to save face.
From the start, Trudeau has dismissed the truckers’ concerns and tried to discredit them by claiming they’re a fringe minority with “unacceptable views.” Yet, a recent poll suggested that 46% of Canadians have some sympathy with the truckers, even if most disapprove of their methods. That’s higher than Trudeau’s own approval rating.
Rather than meeting with the truckers or even considering some concession or…

Biden Will Go Down as the President Who Poisoned Baseball