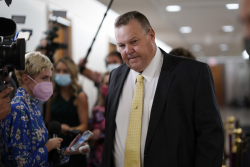 Sen. Jon Tester had been reluctant to tamper with the filibuster rule, but last week said to Politico, “I think if it [the filibuster] wasn’t weaponized, I wouldn’t be talking about it now,” and to his home state Missoula Current newspaper, “I think that what we have now is we’ve got a situation where the filibuster’s been weaponized and used on nearly every bill.”
But that is not the current situation. So far during the Biden administration, the filibuster has been used by the Senate Republican minority sparingly.
Under the upper chamber’s current system, an effective filibuster occurs when…

Freedom in an age of fear

MSNBC’s Ali Velshi: It’s a LIE to Say Democrats Will ‘Turn America Into a Socialist Country’