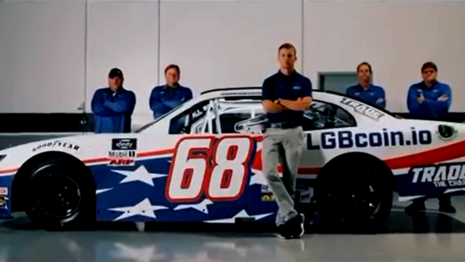 After weeks of being unable to find a sponsor due to his name becoming part of the viral “Let’s Go Brandon” meme, NASCAR driver Brandon Brown decided to fight back against the corporate nervous nellies who bowed to cancel culture by embracing the meme.

His new sponsor is LGBcoin, a cryptocurrency that is issuing a “Let’s Go Brandon” coin. As would be expected the media is already slamming Brown for not graciously accepting poverty and the dismantling of his racing team in the interest of political correctness.

An example of this dissatisfaction came on Thursday in a Yahoo!Sports article by Nick Bromberg, “Days after lamenting his plight, NASCAR driver at center of ‘Let’s go Brandon’ chooses to embrace viral slogan.”

Brandon Brown is now choosing to embrace a right-wing slogan that took off after he won at Talladega in October.

“Right-wing slogan.” Well, Bromberg let us know his political bias from the get-go.

Less than two weeks ago, the Xfinity Series driver lamented to The New York Times that he was unable to get sponsorship because of the “Let’s go Brandon” meme that had become an inside joke in conservative circles. Thursday, Brown announced a sponsorship for his car from LGBCoin, a cryptocurrency with “no intrinsic value” that’s attempting to profit off of the slogan.

Brown’s announcement of the sponsorship also comes as NASCAR has tried to distance itself from the slogan, which has come to mean “F*** Joe Biden” after fans at Talladega chanted those three words about the president following Brown’s darkness-shortened race win. The NBC reporter interviewing Brown on the track apparently thought the fans were chanting “Let’s go Brandon” and right-wing internet influencers jumped at the opportunity to capitalize on her comment by making it a euphemism.

Or, more likely, the NBC reporter pretended they were just chanting “Let’s Go Brandon!” which made it even more popular of a meme because it incorporated media deception.

Brown told the Times that he had struggled to draw corporate sponsor interest despite his newfound name recognition because of the political nature of what had happened.

…Brown is clearly choosing to get political and let the side of his car speak now. And it’s now hard to go back and read the Times article with a straight face. It’s very unlikely that negotiations for this sponsorship materialized out of nowhere over the holidays in less than two weeks after the article was published.

It was easy to feel for Brown before this sponsorship deal. As right-wing outlets and political candidates have profited off of merchandise with his first name on it, he didn’t seem to be gaining much from what had been the biggest moment of his NASCAR career. Companies were not jumping to sponsor his car in the weeks after the win.

The media slams on Brown are only just beginning. It should be interesting if NASCAR will bow to liberal pressure since that organization has not yet approved the sponsorship.

Scenes from the College Meltdown