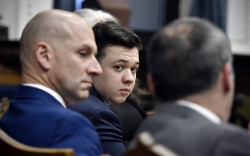 During and after the trial of Kyle Rittenhouse, the white 18-year-old accused of murdering two white men and injuring another, one could hardly keep track of the insanity based on falsehoods recklessly peddled by media and politicians.
In Chicago, the Rev. Jesse Jackson marched in the front line of a group of protesters where some chanted, “When black lives are under attack, what do we do?”
Black lives under attack? Rittenhouse is white, as were the two men he shot dead and the man he injured.
In September 2020, presidential candidate Joe Biden posted a video that included a picture of…

About Those “Republican Security Officials”