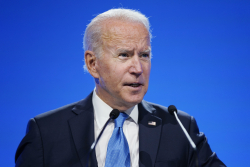 A good friend who owns a major auto dealership in the Dallas area recently told me he typically has about 500 to 1,000 cars and trucks on his lot. Now, he has 15. That’s how severe the supply chain problem has become.

He said people are buying cars over the sticker price. You usually haggle down the price for a new car. Now, you haggle up the price! Welcome to Bidenflation.

But now, the Commerce Department has reported that the high-flying U.S. economy with a 6.5% growth rate for the first half of this year has crash-landed in the third quarter with an anemic rate of just 2% growth. Those lousy numbers predate the supply chain crisis that emerged in October.

At the start of the year, the Philadelphia Federal Reserve Bank predicted 7% growth. So, that’s quite a downgrade we are seeing.

Car sales, for example, are way down because of microchip shortages. The carmakers also don’t have the metals they need to make the cars. Don’t try to buy a used car either. Those prices in many parts of the country are up by more than 20% — even for clunkers. Many grocery stores now have empty shelves of produce and vegetables.

It means we have slow growth while inflation has hit its highest level in more than a decade at 5.6%. In addition, consumer confidence in the economy has tumbled.

All of this is a bit reminiscent of the economy of the 1970s. Does anyone remember the term stagflation? Those under the age of 40 probably don’t even know what that is, and they’ve certainly never experienced it upfront and personally.

Here’s the definition from Investopedia: “Stagflation is characterized by slow economic growth while at the same time accompanied by rising prices [i.e., inflation].”

Under Presidents Richard Nixon, Gerald Ford and Jimmy Carter, years of persistently high inflation triggered a surge in unemployment. That then led to the term “misery index.” The sum of the inflation rate and the unemployment rate. It exceeded 18% in Carter’s last year in office.

And then it was, “So long, Jimmy.” With the economy sagging, Carter lost a landslide election to Ronald Reagan.

The lesson here is straightforward: The witches’ brew of slow growth and higher prices is the ultimate curse for politicians.

Inflation, which had been relatively tame for 40 years, has been a cascading problem in President Joe Biden’s first 10 months in office. The consumer price index suddenly galloped from less than 2% in the Trump years to 5% and 6% in the past four months. The cross-your-fingers hope by the Federal Reserve Board and the White House that the sticker-price rises at the grocery store, the restaurant and the gas station were only “transitory” have melted away like an ice cream cone on an August afternoon. Inflation is accelerating, and Jack Dorsey, the CEO of Twitter, predicts hyperinflation.

Let’s hope he’s wrong, but there is no plan in Washington or by the Fed to slow it down.

In fairness to Biden, some of the steep rises in prices were bound to happen due to the depressed prices in 2020. As consumer spending popped like a cork from a champagne bottle when lockdowns ended and the economy returned to normal, there was a natural demand response to reopening.

But nearly every Biden policy has made inflation and the economic slowdown worse. The absurd $1.9 trillion blue-state bailout bill passed in March marinated the economy with $100 bills as if dropping like confetti from helicopters. According to Casey Mulligan at the University of Chicago, the expansion of welfare programs such as food stamps and unemployment benefits (not tied to working) is paying people up to $75,000 for not working a single hour in many states.

Big surprise that the labor force participation rate had shrunk and companies had 11 million jobs they couldn’t fill. Last month, nearly 200,000 people dropped out of the job market.

No wonder that the Job Creators Network says that small-business optimism has seldom been lower than today. When you treat profitable companies like villains, the owners go into protection mode.

Why invest when the politicians in Washington are threatening to tax away your earnings in the name of paying your “fair share”? Businesses that make profits are now demonized as enemies of the people in this new liberal anti-growth crusade. They keep forgetting that without employers, there are no jobs.

The income redistributionists who seem to be driving the Democratic Party agenda will soon learn that their pixie dust economic doctrine called modern monetary theory, which posits that Congress can spend and borrow ad infinitum, is a giant hoax. When the political class begins to plunder company profits indiscriminately in the name of “fairness,” the profits and the businesses start to disappear.

So, if Congress and the White House are afraid of the forces of stagflation, as they should be, what should they do?

The first and most urgent step to contain stagnation is to defeat Biden’s $4 trillion spend, tax, borrow and print money scheme.

This week’s GDP report is a five-alarm siren warning that the Biden debt binge has to stop now. Hopefully, temporary stagflation doesn’t turn into runaway stagflation.

Newsom’s Recall Is a Predictable Response to One-Party Rule