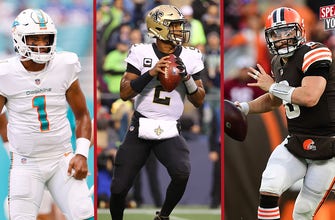 Week 8 is off to a hot start after the Green Bay Packers upsetting the Arizona Cardinals on Thursday Night Football. Marcellus Wiley and Emmanuel Acho share the biggest headlines heading into the weekend, including Jameis Winston facing his former team, the Tampa Bay Buccaneers and Baker Mayfield’s return to field against AFC North rival Pittsburgh Steelers. They also point out quarterbacks to watch, including Kirk Cousins facing the Dallas Cowboys on in a PrimeTime battle. Will this be Tua Tagovailoa’s final game as a Miami Dolphin? Can Jalen Hurts bounce back from a rough Week 7 performance against the Detroit Lions?

Marcellus Wiley: The Chiefs are feeling real turbulence; they need this win more than the Cowboys I SPEAK FOR YOURSELF