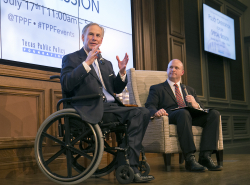 After months of deliberation behind closed doors, the Heritage Foundation board has decided on a new president. The selection for the prestigious post is Kevin Roberts, RealClearPolitics is the first to report.

Formerly the head of another think tank, the Texas Public Policy Foundation, Roberts (pictured at right, with Texas Gov. Greg  Abbott) has been described as a “cowboy Catholic.” An academic with a doctorate in American history, he is not, however, a seasoned political operator by inside-the-Beltway standards. And that, sources say, is by design.

Barb Van Andel-Gaby, chairman of foundation’s board of trustees, succinctly described the new president as a “DC Outsider.” That choice will have ripple effects, not just in Washington but throughout the country as Republicans search for ideas and methods to stem the tide of an emboldened and increasingly progressive Democratic Party that controls the White House and both chambers of Congress.

After RealClearPolitics broke the story earlier this year that Kay Coles James would be stepping down as president, the conservative editorial board of the Wall Street Journal observed that “[w]hoever replaces her will say a good deal about the future of the political right.” In his first interview since accepting the position, Roberts told RCP that his selection means that the conservatism of the next decade and the next century will “not only be less DC-centric, it will be one that gets back to its roots of being hostile, hostile, hostile to the centralization of power in the national capitol.”

The news comes when many political observers see the ideological right in disarray, and at a moment when conservatives are trying to navigate a post-Trump administration electoral wilderness. Roberts sees a more bullish future. He predicted the country is “about to enter the golden-era of federalism,” before pausing to add that this is another way of saying that “Providence is still looking over this country” and the country must embrace that vision “if this republic is going to flourish.”

Talk of renewal punctuated by references to civic virtue helped the self-described “recovering academic” win over foundation trustees. Competition was stiff, and speculation over who would take the helm of Heritage became a favored parlor game in conservative circles. A headhunter helped compile a list of more than 100 names. The board then narrowed it down to about half-a-dozen finalists before interviewing candidates in person.

Former White House Chief of Staff Mick Mulvaney was interested but didn’t make the final cut. A former secretary of labor, Eugene Scalia, was also considered. Other Trump alumni such as Russ Vought, previously the director of the Office of Management and Budget and currently the head of Center for Renewing America, had already moved on to other pursuits before the search began. That the board would look to Trump World for recruits is not surprising. “We were Ronald Reagan’s favorite think tank,” Ed Feulner, the founding president of Heritage, privately told foundation staff four years ago. “And today we are, and will continue to be, Donald Trump’s favorite think tank.”

Even Trump’s vice president was floated as a potential pick for a time. “Mike Pence was actively being courted for a position in December,” a source directly involved in the talks told RCP. Pence ultimately took a post at the organization as a distinguished visiting fellow. In any event, the guesswork is now over. Foundation employees will soon meet Roberts for the first time as president. Heritage prides itself on defining “the truth north” for the right, and Roberts was quick to reorient the organization as an ideas shop.

“A think tank occupies the space between policy making and politics and, on the other side, the academy writ-large,” he told RCP. “In other words, a think tank at its best — and Heritage has set the standard for 48 years — is one where you have academic quality research.”

Yet, critics who have complained in recent years that the organization had become too political and less cerebral may be disappointed. “A think tank, at its best, doesn’t merely leave its thinking on paper,” Roberts said. Heritage sought an answer to that problem by ratcheting up pressure on lawmakers during the Obama years, angering establishment Republicans in the process. A political arm of the foundation, Heritage Action for America, was founded in 2010.  Its paradigm wasn’t strictly scholarly: “If you can’t make them see the light, make them feel the heat.” Does the new foundation president see Heritage as an ideas factory or a lobbying shop then? Both. “It is an institution of civil society, and as such, I wouldn’t ever think about splitting that baby,” Roberts said.

“We have got a real opportunity in the near term, not just for the 2022 and 2024 election cycles, but for the next decade,” Roberts said of the organization’s political and policy goals “to help define what institutions who are center right do — not just what they say and not just who they hire, but what they do and how they act.”

The intellectual orbit on the right has expanded since the 1980s when the Reagan administration borrowed heavily from the foundation’s “Mandate for Leadership.” A constellation of new groups, many of them founded by Heritage alumni, have exploded on the scene. The Conservative Partnership Institute. American Compass. The America First Policy Institute. And, of course, the venerable American Enterprise Institute was there all along. All of them offer their own flavor of conservatism, and differing policy priorities. Roberts welcomes them all and says the disparate strains of conservatism underscore the “fusionism” mission of Heritage. This requires healthy debate, he said, likening Heritage to “the mothership” that would help keep that flotilla “rolling in the same direction.”

Heritage will have its work cut out. Donald Trump tore the ideological curtain, and a number of factions have rushed in to introduce new, competing orthodoxies. While Roberts sees some innovations in the populist moment to be embraced, like skepticism of “an overly proactive foreign policy,” he also warned of the “excesses of populism,” a temperament defined by an “inclination for really quick solutions.”

As Roberts sees it, solutions to what ails America already exist. Enter his longed-for golden era of federalism. “Hopefully the conservatism of the future will harness those impulses,” he said, while adding that he sees a need for individual states, the proverbial laboratories of democracy, to do the leg work. “If it’s the states who are pushing that kind of populism, if it’s governors and state legislators and state attorneys general who are doing that, then that’s much more productive for civil society and for good governance.”

Roberts predicts that conservatives may get into trouble if they skip that step and jump to empowering a more muscular state to do too much too quickly. This fear comes to a head as conservatives, long wary of concentrated government power, develop an appetite for regulating the concentrated power in private hands. Ohio Republican J.D. Vance, for instance, recently floated the idea of “seizing the assets” of liberal organizations that “are destroying this country.”

Heritage’s incoming  president cautions that conservatives should not go so far as to create the tools of their own destruction. “If some conservatives succeed in taxing those endowments, seizing the assets of those endowments,” Roberts warned, “it’s just a step or two for the next hostile presidential regime” to use that as a pretext to regulate what religious organizations or other groups might say or do.

The historian in him notes that two competing ideas can be  that true simultaneously.  For instance, he says that while private property and private enterprise “are good, in a philosophical sense,” it’s also true that “some of people running private corporations are enemies of the state,” a term that he says describes individuals “in cahoots with the deep state” who seek to manipulate regulators to their own ends.

“But that doesn’t lead us to the conclusion that we therefore ought to change, for every private corporation in the country, not just our American tradition but our entire Western tradition that goes all the way back to Athens and Jerusalem,” he added.

Another example: The popular conservative impulse to regulate overbearing tech giants in Silicon Valley. He gets the impulse, but worries that overreacting could end up squelching needed innovation. “But that’s the rub, right?” he said. “Because Google and Facebook and Twitter and others are harming civil society right now. I mean, I happen to think they’re violating the First Amendment rights of Americans.”

Roberts is prone to nuanced answers, and it is impossible to preview the full menu of policies that Heritage will grapple with under his leadership. As if to underscore this point, Trump released a statement warning that Republicans will sit out the midterms and the presidential election if the fraud he alleges occurred in 2020 is not “solved.”

Another thorny issue. Another measured response from Roberts.

“Conservatives have made great strides this year to enact state reforms that strengthen the integrity of our elections. I’m proud of the reforms we made in Texas and I’m glad so many other state policymakers have prioritized election integrity,” he said in a statement about the overall issue after his interview with RCP had taken place. He warned that conservatives, at the same time, “need to resist efforts in Washington, D.C., to federalize our elections and render the state reforms meaningless.”

Roberts will have plenty of policy to wrestle with soon enough. But the academic returns to one issue in particular — and not surprisingly given that he founded his own K-12 school in Louisiana (John Paul the Great Academy) before going on to lead a university, Wyoming Catholic College. “People expect me as an educator to always start with education,” he said when asked about the most pertinent political debate on the horizon, “but I actually happen to believe that’s true.”

The question rolls the proper role of government, the ambitions of Heritage, and the current moment all into one for Roberts. And it presents both an opportunity and a test case. “If the conservative movement fails to explain at the state level and on the federal level, the utter demise of America’s education system hastened by COVID shutdowns and critical race theory and indoctrination generally,” he said, “we don’t deserve to be doing what we’re doing.”

Roberts will introduce himself to Heritage for the first time Thursday morning as president. He knows many of the scholars and their work already, and while he says he understands the gravity of the mission that he has been entrusted with, he expects to succeed. Roberts believes the organization can unite the conservative movement. “Heritage is going to succeed in this,” he said, “because it has virtuous people who are great scholars and who understands the moment.”