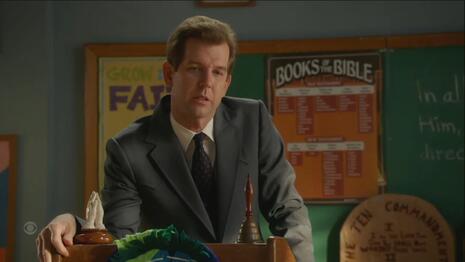 CBS’s atheist comedy Young Sheldon took yet another swing at its favorite target, Christianity, on Thursday’s episode, “Snoopin’ Around and the Wonder Twins of Atheism.” And while there’s nothing funny about painting Christian believers as clueless fools and God as cruel and fictitious, an opportunity to disparage Christianity always trumps comedy when it comes to this show.

The writers wasted no time as this scene from Sunday School where the church’s pastor (Matt Hobby)  becomes intimidated and flustered by questions the students ask him – especially Sheldon (Iain Armitage) – happens within the first minute:

Adult Sheldon (voiceover): The rest of the day was filled with football, church, and the only school I didn’t enjoy attending, Sunday school.

Pastor Jeff: And then his mother put baby Moses in a basket and sent him down the river.

Pastor Jeff: Maybe he was crying all night and his mother and father needed a break. And maybe his grandmother was in town to help out, but she went to bed early because she had jet lag after her flight from Dallas.

Sheldon: She did it because Pharaoh ordered all the male babies to be killed.

Missy: That’s really in the Bible?

Pastor Jeff: Back to Moses. He was found by Pharaoh’s daughter and went on to lead the Israelites out of Egypt, because even when you feel lost, God has a plan for us all.

Missy: What was his plan for the male babies who didn’t get rescued?

Sheldon: There was a decree to throw them in the river.

Billy: That is not cool.

Pastor Jeff: That was Pharaoh, that was not God.

Sheldon: But according to you, it’s all part of God’s plan. How do you sleep at night?

Pastor Jeff is so overwhelmed he decides he needs to hire a youth pastor to make up for his ineptitude because liberals love to twist and simplify difficult passages of the Bible to sow doubt and attempt to make believers look foolish.

Sheldon and Missy’s mom, Mary (Zoe Perry), is a strong Christian, but even she is unable to defend her faith. When she tells her children the church is hiring a youth pastor to “get young kids excited about God,” Missy asks, “The same God who lets babies get thrown in rivers?” Mary nervously explains, “Well, that was Old Testament God. He gets more fun later.”

Missy ends up turning to her brother Georgie (Montana Jordan) for answers, but he comes up “short(s)” as well:

Georgie: Why are you watching The Ten Commandments?

Missy: I don’t understand how a God that’s supposed to be good lets such bad things happen.

Georgie: Oh. Hmm. Can you think about it while I watch Yo! MTV Raps?

Missy: Sure. Do you believe in God?

Missy: But in the Bible, He does all kinds of mean stuff. If He’s good, why would He do that?

Georgie: Maybe He just wants to show He’s in charge. Hulk Hogan’s nice, but in the ring, he will mess you up.

Georgie: That’s what I do.

Missy: Do you ever wonder if it’s all made-up?

Georgie: Look, this is Texas. We like football. We like God. And beef. Beef’s up there, too.

Missy: But how do you know there’s a God?

Georgie: See that girl dancing in them shorts? There’s a God.

When Missy remarks to Sheldon that it “seems a little scary to just stop believing,” he asks, “Is it more comforting to believe in a God who could flood the world and kill everyone because he had a bad day?” Missy tells him that’s a good point, making it clear no one in the writers’ room understands Christianity.

Missy eventually decides she doesn’t believe in God and refuses to go to church. But when Mary says the new youth pastor will be there, Sheldon gets excited and declares, “We can attack his belief system together. Like the Wonder Twins of Atheism.”

Thankfully, Youth Pastor Rob explains to the children, “God is real. God is everywhere. And God loves you,” but he precedes that by saying the Bible is “just a book,” as he purposefully drops it on the floor.

Missy tells her mom on the drive home, “Pastor Rob said it doesn’t matter if I believe in God ’cause God believes in me.” Sheldon adds, “Well, I told him religion isn’t objective and there’s no proof for it.” When Mary says she bets the pastor didn’t like that, Sheldon counters, “He loved it. He quoted Kierkegaard and said if you could prove it, there’d be no room for faith.”

While this is technically true, there has been incredibly strong, scientific proof of the Bible that’s been discovered in recent years. Eric Metaxas, author of Is Atheism Dead?, which details this proof, gave a compelling speech about the science during a recent service at Cornerstone Chapel in Leesburg, VA.

Too bad Hollywood doesn’t seem to consult real Christian leaders for these storylines the way they work with GLAAD, BLM activists, and Planned Parenthood on stories. That’s because their real goal is to disparage Christianity. Unfortunately for them, a liberal, bigoted sitcom will never be strong enough to stand against the Word of God.

Conservatives Fight Back! This episode was sponsored by Amazon, Liberty Mutual, and Subaru. Click each advertiser for their contact information so that you can let them know how you feel about this episode.