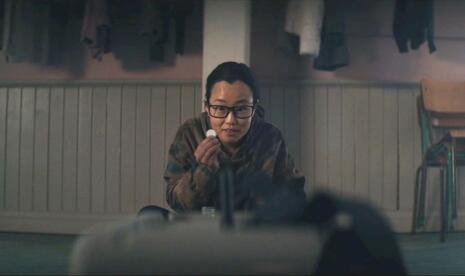 Y: The Last Man continued its weekly descent into left-wing hell with a scene in which a biology-denying scientist tries to feed Holy Communion to a monkey.

In the dystopian trans show’s latest FX on Hulu episode, “Weird Al Is Dead,” released on Monday October 4, the sole biological male who survived a man-killing plague, is with a secret agent and a scientist who wants to clone him. The three attend a bizarre religious-like outdoor ceremony where women walk around in circles to a Radiohead song while holding candles. The characters find the experience very powerful when in truth it is comically ridiculous.

After leaving the ceremony, the three characters hide from military officials looking for them by sneaking into a church. Apparently, the church does not move them in the same way circling around to an English rock band does. In a particularly offensive scene, the scientist, Dr. Mann (Diana Bang), feeds communion bread (it is unclear if it is consecrated) to a monkey while she mocks the Eucharist.

Y: The Last Man is certainly not the first show to mock the Eucharist. Holy Communion has been mocked on network television, too. Since Hollywood regularly promotes Satanism, it is not surprising that they take opportunities in their scripts to mock a sacrament.

The series also includes a man-hating cult of women hiding out in Pennsylvania who talk endlessly about how awful they think men are to women. “I saw it every day I was a cop. Women beaten, imprisoned, killed, not just by maniac psycho killers, but by the men who ‘loved’ them,” Roxanne, the leader of the group says. The women are hostile towards a “trans-man” (a woman taking testosterone) and are ordered to never be alone with her. Man-hating feminism and transgenderism at each other’s throats. That’s intersectionalism for you.

Two of the more interesting characters in the show continue to be two conservative women who are supposed to be either bad or deranged, at least according to the actors who play them and the main characters of the show who talk about them.

Kimberly Cunningham (Amber Tamblyn) and Regina Oliver (Jennifer Wigmore) are conservative women. Regina is supposed to now be president according to the line of succession, but she was lost in a foreign hospital in the early months after the plague hit and a Democrat took the helm instead. Kimberly is the daughter of the dead Republican president.

After a Democrat staffer discovers she is unexpectedly pregnant and is considering abortion, Kimberly offers to adopt her child. But, tonally, the show makes even this moment come across somehow selfish and off. Kimberly is desperate to be a mother again since her young sons died in the plague. The staffer is visibly disturbed by Kimberly’s urgency and walks away.

Kimberly chats with Regina by the bulletin board filled with pictures of men who died. Both women mention feminist double standards in regards to accomplished women.

Kimberly: They should be parading you around like a feminist hero.

Regina: Feminism only applies to liberals, Kim. You know that. My mother used to bitch about the state of the world. “If only women were in charge, there’d be peace.” ( scoffs ) I never bought it. Of course she was a Democrat. Back then, I was, too. Mm. Voted for Reagan just to piss her off. Never looked back.

Kimberly: You know, this room is the only place you’ll hear any of them mention what we lost. Sometimes I think… Sometimes I think they’re relieved. This is the world they’ve always wanted.

When Regina begins questioning the acting president’s lack of honesty and transparency regarding missing helicopters, the left-wing president and supposed feminist deflects to Kimberly’s mental state instead.

“Oh, wow, for a feminist, you’re sure quick to call a woman crazy,” says Regina. Her statement is particularly spot-on since all the left-wing women on the president’s staff dismissed Regina as crazy when they learned she was alive. But Regina is correct. The president is hiding critical information that her cabinet needs to know.

So, in this series men have been eliminated from the world. The conservative women are supposedly “crazy” even though they are the only ones who seem to have a clue about government lies and corruption. Man-hating feminists are at war with transgenders. Real religion is mocked and replaced with “hymns” from an old rock band. Welcome to the perfect encapsulation of a dysfunctional left-wing fantasy world.