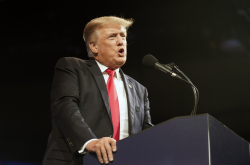 He said he was “flabbergasted” by reports that special counsel John Durham charged Hillary Clinton 2016 campaign-affiliated lawyer Michael Sussmann with lying to the FBI to spark an investigation into “Trump-Russia collusion.”

“It seems like years ago that we were hearing that Trump was colluding with Russia, that he wouldn’t have won the election without Russia, that his whole presidency was kind of a Putin plot,” he said. “There’s now serious evidence it was the Clinton campaign and Hillary Clinton acolytes that were involved in the generation of what turned out to be an untrue conspiracy.”

“Think about how much media you watched? Me, a person who, broadly speaking is coming from the left, a liberal, certainly not a Trump supporting Republilcan… I find myself in awe, gobbsmacked, flabergasted and startled by these revelations that Russiagate was a Democratic conspiracy.”

“I want to believe the Democratic Party are reliable. That they are the party of diversity, and truth, and social justice, all great, positive ideas. What my concern is becoming is these are totemic issues pushed to the forefront to mask regular corruption.”

“Every late-night talk-show, all over the news, it was just — you were bombarded with it…. And it was like, being sort of in a way discussed as if it was just an absolute fact. To discover that this was propaganda, a construct, a confection by the Democratic Party — who, of course, are now in government — is kind of beyond disappointing, because you begin to question and query what other things may not be true.”

“Once you recognize that people create certain truths in order to meet certain ends and aims, the idea that you might be able to trust their integrity obviously dissolves. This in itself is a big enough issue to cause concern, but what else is implied?”

“It suggests to me that everything is a sort of construct. All the information that is peddled is unreliable. The primary function is to create a state where people do not query or question… and truth is just lost and irrelevant.”

“A lot of these stories are so important that you want to believe what you’re being told is authentic conveyance of truth.”

America Is a Nation In Decline