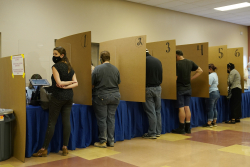 We are a rare pair in American politics.

One of us, a Republican, bemoans government’s involvement in people’s lives and its innate ability to make things worse. The other, a Democrat, believes if government doesn’t address America’s biggest problems, from climate change to social equity, no one will.

We don’t agree on much of anything — but we do agree on three important things:

In the best of times, our elected officials aim to serve the public interest despite the failing system, and do so in a fiscally responsible way with the consent of the governed. In the worst of times, as we’re witnessing today, our leaders are held captive by the system and weaponize a zero-sum politics, which results in catastrophic setbacks for the country.

But whatever the moment in time, each of us has the power to choose what to fight for, and who to fight with. The two of us, conservative and liberal, have chosen to put our partisanship aside and fight together as co-directors of a new organization — the Institute for Political Innovation — with one purpose: forcing this critical correction in our political system so that elected officials value solving policy problems over political problems.

We still believe the distinct fundamentals of our party platforms are essential to our worldview, but we also detest that our party officials bow to small groups of extreme voters and special interests, and as a result, rarely reflect, respect, or even consider cross-partisanship.

Maybe you are losing faith in your elected leaders and question their motivations. You’re right to. Like rational actors in any industry, elected officials are self-interested and respond to incentives — first and foremost being their election prospects. As our founder, Katherine Gehl, a business leader and originator of Politics Industry Theory, has said to tens of thousands of people as we’ve built our movement, “In our current system, there is no connection between our elected officials solving problems and the likelihood of their getting reelected.”

How do we reconnect those interests in the most powerful and achievable way? The answer is simple. Start with what determines the ruling incentives: a party primary election.

As many Americans are starting to understand, the party primary is the election that matters today. More than 80% of the House of Representatives won their seat in their party primary — a race as low on truth-friendly tactics and voter participation as it is high on wedge issues and out-party hate. In the rare case where the general election is relevant, winning doesn’t require a majority due to plurality voting, or “first-past-the-post voting,” a relic brought over on the boat from Britain. Taken together, party primaries and plurality voting force candidates further to the right or the left and make pariahs out of cross-partisan negotiators.

We can change this, and quickly, by adjusting how primaries work and by making the general election the election that counts. It’s already happening with what we call “Final-Five Voting,” a partisan-agnostic two-step innovation.

Final-Five Voting uses a single, top-five primary in which all qualified candidates, regardless of party affiliation, face all voters, regardless of party registration. The top five vote-getters proceed to the general election where voters rank them in order of preference. The winner is the one who receives true majority support — over 50% — either in the first round or through a series of instant runoffs.

The beauty of Final-Five is its simplicity: More choice in candidates means more voice for voters and better results from our elected officials. Candidates from all parties get to make their case in the primary and if their ideas (along with their party identifications) carry them to the general, they are empowered to campaign to the entire electorate — not just the plurality slice — if they want to win.

From there the whole legislative calculus changes. With the threat of getting “primaried” eliminated and the injection of electorate-wide accountability through ranking in the general election, officials will have to do their jobs—negotiate, make deals, navigate the complex trade-offs of legislation that solves big problems—or lose their jobs.

While this sounds great in theory, is it doable? Yes. Thanks to the citizens of Alaska who were fed up, Final-Five style elections already exist. In 2022, Alaska will follow this methodology.

But does it work? Yes. Just a few days after Alaskans adopted better elections, the state legislature brokered passage of a budget that was previously headed toward an inevitable government shutdown. Why did this happen? Because legislators now know that when they’re up for reelection, they’ll need to answer to the general electorate for what they did (or didn’t) do. Accountability is back in Alaska — and every state in the union is empowered to make the same changes, today.

Again, we don’t agree on much. We’d probably be more comfortable arguing from across the table than working shoulder to shoulder — and if we do our jobs right in advancing Final-Five Voting, that will be our reward, with one critical difference: Our parties’ ideas will be more powerful than the next primary election.

Aaron Menenberg (R) is a co-executive director of The Institute for Political Innovation, a non-profit based in Chicago.

Why a NYC School Told Its Students to Stay Home

Biden Should Aim for a Treaty, Not a Deal, With Iran