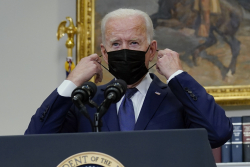 Last week, President Biden announced a series of measures intended to further combat the spread of COVID-19. The most controversial is what has become known as the vaccine mandate. Under this, federal employees and contractors, as well as health care workers at hospitals that receive federal funds, will have to receive the vaccine. Employees at companies with more than 100 workers will have a choice between receiving the vaccine and undergoing weekly testing.

To be upfront: This is not a piece about the wisdom of such a mandate, nor is it about the legality of the mandate. This is solely concerned with the political effects of the order. These impacts are difficult to identify with certainty at this point – after all, we are over a year out from the midterm elections. Perhaps this will be a boon to Democrats. The storyline on how that plays out would be straightforward: The mandate helps to end to the pandemic; people feel grateful to the Democrats and president; the economy finally surges ahead; and Democrats enjoy success in the midterms.

But there’s another potential storyline, which is grimmer for the Democrats. There are two components to it: an activation story, and a defection story.

The activation part is straightforward. I think the federal mandate will prove to be generally popular, perhaps even by a significant margin. But that isn’t the entire story when reviewing public opinion polling. Different issues affect different groups differently. For example, various gun control measures often poll well, yet politicians typically shy away from them.  Part of it is that these measures have a history of faring worse at the ballot box, as people seem to like them more in the abstract than they do in reality. But part of it is that gun owners simply care about the issue more, generally speaking, than non-gun owners. That isn’t to say there aren’t some non-gun owners who care deeply about the issue, but the people who own guns and stand to lose them are generally threatened more directly by the prospect of bans than non-gun owners are by the lack of one.

The vaccine mandate is similar. To be sure, there are probably lots of people who will be excited about and strongly approve of the president’s measure. But the excitement about someone else hypothetically getting a vaccine to protect others from getting sick is unlikely to be offset by the anger that those who feel coerced into getting a vaccine are likely to feel. Remember, from the point of view of a person who does not want to be vaccinated, this represents an unwanted injection of a chemical into their body. That sort of perceived assault on body integrity will be a very powerful motivator in voting, and they are unlikely to vote for the party that forced it.  Medical decisions are deeply personal ones that people feel very strongly about, regardless of the underlying merits of their beliefs.

The second problem is that the vaccine mandates create cross-cutting pressures in a way that threaten the Democratic coalition. Remember, the unvaccinated are disproportionately Hispanic and African American, two key groups in the Democratic coalition. Today, Democrats rely on winning around 90% of the African American vote and 70% of the Hispanic vote for their majorities.

If one looks at the crosstabs of the Politico/Morning Consult poll of public opinion on vaccinations, opinion among blacks against the mandates is probably stronger than Democrats would like. Even with the partisan cue of “President Biden” in the question, 20% of blacks oppose the mandate vaccinations for large employers, 18% oppose mandates for federal contractors, and 18% oppose mandates for health care workers. Among Hispanics, those numbers are higher (although Democrats depend less on astronomical vote shares among this group).

The claim here isn’t that the mandates are likely to turn this election singlehandedly into a GOP wave like the one in 2010. These differential effects, should they manifest, are likely to be quite modest. But in heavily contested House and Senate races, small margins matter. There is a genuine risk for Democrats that Biden’s executive orders move the needle away from them next year.

Is Lindsey Graham an idiot?

Thoughts from the ammo line