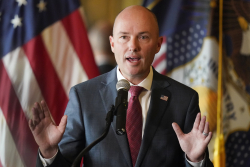 Thirty-five state governors from both parties say they will welcome Afghan refugees forced to flee their country because of the Taliban takeover. “We’re a state of refuge,” said Gov. Gavin Newsom as he welcomed refugees to California.

Across the country, another Democrat echoed this sentiment. On her second day in office, Gov. Kathy Hochul issued a statement saying that “as the world watches the instability in Afghanistan unfold, New York is stepping up to once again serve as a beacon of hope and refuge.”

A powerful welcoming statement was tweeted by Utah Gov. Spencer Cox (pictured) on the last day of the U.S. evacuation from Kabul of Americans and Afghans. “Utah was settled by refugees fleeing religious persecution,” Cox said. “We understand the pain caused by forced migration and appreciate the contributions of refugees in our communities.”

Cox, a Republican who assumed office 2 ½ weeks before President Biden, wrote a letter to Biden offering to “assist with the resettlement of individuals and families fleeing Afghanistan, especially those who valiantly helped U.S. troops, diplomats, journalists and other civilians over the past 20 years.”

Another Republican, Massachusetts Gov. Charlie Baker, said in a series of tweets that the Bay State is “ready to assist Afghan refugees … seeking safety and peace in America.”

These welcoming statements came as the White House sought to tamp down any political backlash “and avoid the sort of politicization and outrage that plagued efforts to resettle Syrian refugees in 2015 and created havoc in the federal refugee program,” reported Politico.

In an enormous evacuation operation, the United States and its coalition partners airlifted 123,000 people out of Afghanistan in August after the collapse of the government and the rapid takeover of the country by the Taliban. Included in this number were about 6,000 Americans, but most of those evacuated were Afghans.

Early in the process, former President Donald Trump issued a statement saying that Afghans who had helped the United States “should be allowed to seek refuge.” But he later warned of alleged dangers posed by those who were desperately trying to flee their country before the Aug. 31 deadline.

“How many terrorists will Joe Biden bring to America?” Trump asked.

The Biden administration anticipates that 50,000 Afghans will be allowed to come to the United States without a visa on humanitarian grounds. A number of these are people who assisted U.S. forces or the U.S.-backed Afghan government.

But because of the rapid advance of the Taliban, many Afghans who played helpful roles were unable to get out despite Biden’s promises to evacuate them. According to the Wall Street Journal, as many as 60,000 Afghan interpreters and U.S. allies remain in their country.

The United States has often had more people in the queue for admission than were allowed to enter. “All of our people all over the country — except the pure-blooded Indians — are immigrants or descendants of immigrants, including even those who came over on the Mayflower,” President Franklin D. Roosevelt once said.

FDR loosened immigration restrictions imposed by his predecessor on persons “likely to be a public charge,” but this wasn’t nearly sufficient to cope with the flood of European Jews trying to flee Nazi Germany. The United States admitted 123,868 Jewish refugees from 1938 to 1941. Hundreds of thousands of other applicants were denied entry and perished at Nazi hands.

Three years after World War II, Congress passed its first specific refugee law, the Displaced Persons Act of 1948, in an attempt to help nearly 7 million people displaced in Europe by the war. Under this law the United States admitted more than 350,000 displaced persons. Ever since, various laws and executive actions have enabled refugees fleeing wars, violence and persecution to escape. Many of them entered the United States.

The largest evacuation before Afghanistan occurred in December 1950 when the American military brought out 91,000 Koreans by ship from Hungnam, on the east coast of Korea, as Chinese communist forces were advancing. Most of these evacuees settled in South Korea. Some 15,000 came to the United States during the Korean War, but immigration from Korea to the States steadily increased after the Immigration Act of 1965 replaced a law that discriminated against immigrants from Asian and Latin countries.

More than 36,000 Hungarians were admitted under two programs after the Soviet Union crushed the Hungarian revolution of 1956. More than 58,000 Cubans fled to the United States after Fidel Castro took power on Jan. 1, 1959. Another 250,000 Cubans arrived in the Cuban airlift of 1965.

Two other waves of Cuban emigration later occurred. In 1985, the Castro regime allowed Cubans to leave and 125,000 of them did so in the Mariel boatlift. Another 30,000 were intercepted at sea in 1994 and interned at the U.S. naval base at Guantanamo. Some 20,000 Haitians escaping political turmoil and poverty were also intercepted and interned.

Most of those Cubans were admitted to the United States, but only about half of the Haitians were, according to a Brookings Institution study. North Vietnam’s victory in the Vietnam War created a notable refugee crisis in 1975 to which the present situation in Afghanistan has been compared.

Scores of thousands of Vietnamese who’d assisted the U.S. military or supported the South Vietnamese government fled their country by any available means. In response, President Gerald Ford set up an inter-agency task force that admitted 131,000 Vietnamese to the United States. Ford came under political fire for doing this, and on May 6, 1975, said he was “damned mad” at those who opposed that policy.

“We’re a country built by immigrants from all areas of the world, and we’ve always been a very humanitarian nation, and when I read or heard the comments made a few days ago I was disappointed and very upset,” Ford said.

Later in the decade, hundreds of thousands of people including many ethnic Chinese left Vietnam in overcrowded boats while thousands of Laotians and Cambodians fled communist regimes by land. In 1979, President Jimmy Carter doubled the number of Indochinese refugees the United States had agreed to accept. Between 1980 and 1990, according to data compiled by the Pew Research Center, nearly 590,000 refugees from Vietnam, Cambodia and Laos were admitted into the United States.

Since then, thousands of other refugees have settled in the United States, including Nicaraguans fleeing the Sandinista regime in 1979 and Kosovars who came during the 1998-1999 war between a remnant of Yugoslavia and the Kosovar army.

Negative Impact of 9/11 on Refugee Acceptance

Public acceptance of refugees, never high, turned negative against those fleeing the Middle East after terrorist attacks on the World Trade Center and the Pentagon killed 2,996 people on Sept. 11, 2001.

President Barack Obama’s call in 2015 to admit refugees from the deadly Syrian civil war aroused political opposition. Obama wound up admitting only 11,000, a tiny sliver of the 6.8 million Syrian refugees created by the war. This trickle diminished to a few drops under President Donald Trump, who opposed most refugee admissions, especially from predominantly Muslim countries.

Obama had set the number of refugee admissions for 2017 at 110,000, low by historic standards. Once taking office, Trump slashed that figure to 50,000 and admitted only a handful of Syrians.

Under Trump, the United States ceded its decades-long leadership as the world’s most refugee-welcoming nation to Canada, which has about a tenth of the U.S. population.

The anti-poverty Borgen Project has found that refugees “stimulate the economy, enrich culture and supplement the job market.” A study led by S. Garnett Russell of Teachers College at Columbia University concluded that newcomer immigrant and refugee students benefited the United States and had a “stronger sense of belonging” at school than U.S.-born students.

These findings were echoed by Renee Underhill, who taught high school students from Ethiopia, Eritrea, Iraq, Somalia, Sudan and Syria at the Newcomer Center in Denver. She said these students were highly motivated and fascinated by things that U.S.- born students took for granted, such as a bus ride to school or vending machines.

Speaking of Afghans now coming to the United States, Underhill said that “in addition to the ethical duty of providing for the people of a land we occupied, having diverse students from other lands enriches us.”

It’s encouraging that so many governors are responding on a bipartisan basis to welcome Afghan refugees. There’s no reason they shouldn’t become a boon to our country, as past refugees have been.  As Jerry Ford put it, we’re a nation built by immigrants from all over the world.

Lou Cannon is editorial adviser and columnist for State Net Capitol Journal, a Lexis-Nexis publication. He previously worked for The Washington Post and is author of “President Reagan: The Role of a Lifetime.”

GOP Demands Justice Roberts Find Leaker: 'This Is How He Will Be Remembered.'

The short answer is chutzpah