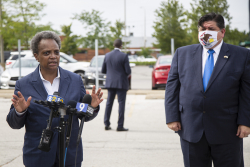 Those aren’t lottery numbers, they’re the ages of kids shot in Chicago over Labor Day weekend. Two of the children, including adorable 4-year-old Mychal Moultry Jr., who was visiting from out of town, died from their wounds.

If you think these numbers would shock the conscience of elected leaders in Illinois, you’d be wrong. There is a lot of talk from officials these days about wanting to “protect our children,” but it’s almost all about COVID, not guns.

Two weeks ago, for example, Gov. J.B. Pritzker clashed with a reporter who asked whether he would shut down in-person learning again if COVID cases continued to rise. Pritzker, who had finished his press conference and was headed out the door, returned to the lectern to inveigh against the reporter: “You come in here with a political agenda and you spread misinformation and I just think you should stop. We now need to protect our children.”

Last week Mayor Lori Lightfoot touted her administration’s efforts to put in place coronavirus protocols to keep kids safe as they returned to in-person learning – punctuated by picture of a teacher giving a lesson in a full hazmat suit.

The truth is that children in Chicago are in far less danger of dying from COVID than they are from getting shot and killed.  According to the Cook County Medical Examiner’s office, over the last 18 months there have been 5,500 COVID-related deaths in the city of Chicago. Only 10 of those (.0018%) were 18 years old or younger.

Remember, too, that most of this violence is confined to just a few neighborhoods in the city and that the overwhelming majority of these victims are African American kids.

Over the last year and a half we’ve been told minority communities needed extra resources because they’ve been disproportionately impacted by COVID. We’ve been told that Black Lives Matter. Shouldn’t those same principles apply when it comes to children dying in the streets of America’s third-largest city on a depressingly regular basis?

For years, our leaders have thrown up their hands at this violence and taken the easy way out by blaming a lack of gun control laws in neighboring states. (The city of Chicago has some of the strictest gun laws in the country.) At the same time, these leaders have been too often quick to demonize police, enacted policies like eliminating cash bail, and prosecutors have continued to let violent criminals back onto our streets. And so kids keep dying.

Maybe if our leaders started treating gun violence in Chicago as a disease – a virus and a plague – they would devote the same level of attention and effort to eradicating it.