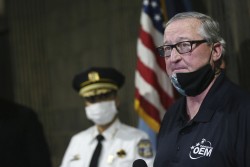 Amid surging crime in Pennsylvania’s largest cities, it remains unclear if Democratic leadership is up to the task of ensuring law and order.

Take Philadelphia Mayor Jim Kenney (pictured), who faces intensifying criticism as the city grapples with a public safety crisis. This year, 137 children under age 18 have been shot in city neighborhoods, and 32 have died. “That’s a bullet ripping into a young person’s body every 40 hours,” wrote the Philadelphia Inquirer’s Helen Ubiñas.

Last month, after a 15-year-old girl was shot in the head in North Philadelphia (she died the next day), community activists called for Kenney to deploy the Pennsylvania National Guard in the crime-ridden city. Kenney, though, said it is not an “effective tool to bring in uniformed, camouflaged, gun-rifle-carrying people in helmets to address [the crime] problem.”

Recent data indicate that Philadelphia, where crime declined in the early 2010s, is now the second-deadliest city in the United States behind Chicago. As the Philadelphia Inquirer recently put it, “There’s only been one day so far this year – Jan. 2 – when not a single person was shot in the city.” The city experienced a 30-year homicide high in 2020. So far this year, homicides are up more than 24% and shootings more than 25%, according to data from the Philadelphia Police Department.

“The epidemic of gun violence in Philadelphia is out of control and our elected officials in the city need to step up and take responsibility,” said Nick Gerace, a retired longtime Philadelphia police officer and president of Protect Our Police PAC.

Prosecutions have fallen dramatically under Larry Krasner, the city’s progressive district attorney who has sparred with Kenney. As it stands, 65% of gun charges have been dismissed or withdrawn this year, marking a 17% increase since 2015. In 2015, there were 375 guilty pleas; in 2020, just 148.

Yet Kenney has deflected blame. In July, for example, the mayor sent a letter to a city council member who favors declaring the gun crisis an “emergency” and claimed that doing so “is not a solution that will demonstrably change conditions in Philadelphia.”

Earlier this summer, after the City Council voted to cut police funding by $33 million for fiscal year 2021, the mayor agreed to eliminate a $19 million increase and cut existing funding by $14 million.

Carlos Vega, a longtime assistant district attorney who unsuccessfully ran against Krasner in May’s Democratic primary, told me that the defund-the-police movement will fail.

“It’s communities of color being killed,” Vega said, observing how 85% of this year’s homicide victims are black. “People have not thought through the impact defund the police is going to have on communities who are suffering the most.”

Philadelphia is not alone among Pennsylvania cities in failing to stave off crime. Often overlooked amid the nationwide crime surge is Pittsburgh, in recent years considered the Rust Belt’s greatest urban success story.

Following last summer’s riots, homicides have about doubled in Pittsburgh in 2021 over the first six months. As recently as April, the city saw a 90% surge in violence, with police officers pleading for more programs and funding. Young people continue to fall victim to violence, and nonfatal shootings are up about 68%, according to the Pittsburgh Post-Gazette. In late August, the University of Pittsburgh warned students about “violent criminal activity,” especially in the popular South Side neighborhood.

Still, earlier this year, Democratic Mayor Bill Peduto slashed the police budget by $5.3 million. Last summer, not long after a disorderly demonstrator was arrested near Peduto’s neighborhood – leading to protests at his house – the mayor acknowledged the “right for people to take to the streets to demand much-needed reforms.”

But Peduto’s praise for protesters wasn’t enough to survive the city’s Democratic mayoral primary this past May. The more progressive Ed Gainey is poised to win his job in November.

Gainey, a state representative who earned endorsements from Democratic socialists and a major health care union, went so far as to accuse Peduto of “overpolicing” the city. He has pledged to “redirect” law enforcement funds to social services.

Pittsburgh’s GOP insiders see no end in sight to the city’s surging crime. Bob Hillen, chairman of the Republican Committee of Pittsburgh, thinks that far-left Democratic leadership under Gainey will continue to give crime a “free pass.”

“We could use more police on the streets right now,” Hillen told me. “I mean, every night there is a shooting. This is well out of hand. We have to do something quick.”

Other regional Republicans are more optimistic. When asked about getting the Steel City’s crime situation under control, Republican state Rep. Rob Mercuri of Allegheny County said, “We can do this if we work together in the Pittsburgh region.”

The GOP is strategizing on how to oust Democrats in a historically moderate state. The focus is on Philadelphia and Pittsburgh. “Bill Peduto and Jim Kenney are gaslighting and deflecting blame,” says Allie Carroll, spokeswoman for the state Republican National Committee.

Kenney is term-limited, with Philadelphia’s next mayoral race in 2022, while Gainey is primed to assume office in a city that hasn’t elected a Republican mayor in 88 years. So Philadelphia and Pittsburgh, two Democratic strongholds, find themselves in similar straits. Will their problems trigger a statewide political backlash?

Gabe Kaminsky is a senior contributor for The Federalist. His work has appeared in RealClearPolitics, the New York Post, Fox News, and other outlets. Follow him on Twitter.

Feel Good Headlines of the Day (and Other Twitter News)