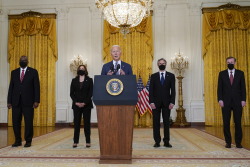 President Biden walked into the East Room of the White House with backup. Four high-ranking administration officials, masked and standing six feet apart, flanked him as he tried to restore calm, assuring the nation that any American still in Afghanistan could eventually get out as that country descends further into chaos.

Vice President Kamala Harris, Secretary of Defense Lloyd Austin, Secretary of State Antony Blinken, National Security Adviser Jake Sullivan. They were all there. None said a word, instead staring straight ahead, motionless or swaying slightly from side to side.

“Let me be clear: Any American who wants to come home, we will get you home,” Biden said as he read from a teleprompter. “I cannot promise what the final outcome will be, or that it will be without the risk of loss.”

While the president did his best to project calm and control,  the assertions and promises he made were immediately questioned by witnesses on the ground, lawmakers in Congress, and even members of his own administration.

All eyes remain on the airport in Kabul, the last remaining exit since the Afghan government folded and its military evaporated. Sullivan told RealClearPolitics earlier this week that the U.S. government is committed to providing safe passage out of the country for American citizens—so long as they can make it to the airfield: “We have asked them all to come to the airport to get on flights and take them home.”

U.S. personnel who have left or are trying to leave report that the commute to the Karzai airport isn’t easy. Instead, they face a harrowing journey as they navigate a daunting gauntlet of checkpoints set up by the Taliban. Republican Sen. Bill Hagerty of Tennessee told RCP on Wednesday that his office remains in contact with Americans near the airfield “who are trying to figure out when they run for it.”

Biden tried to paint a much calmer picture of that exodus Friday, telling reporters that “we have no indication that they haven’t been able to get in Kabul through the airport,” citing an agreement with the Taliban. The president insisted that Americans were receiving safe passage through the checkpoints.

Minutes later he was contradicted by the man who stood just feet away from him. Defense Secretary Austin told lawmakers in a call first reported by Politico and later confirmed by Fox News something else entirely. “We’re also aware some people, including Americans, have been harassed and even beaten by the Taliban,” Austin conceded. The violence, he added, was “unacceptable” and the administration has registered its complaints with the Taliban.

Complicating things further for Biden was the fact that multiple networks have correspondents in Afghanistan who contradicted his assertions in real-time.

“Anyone who says that any American can get in here is…” said Clarissa Ward of CNN, trailing off for a moment, “I mean, technically, it’s possible, but it’s extremely difficult and it is dangerous.” Ian Pannell of ABC News, who is also still on the ground in Kabul, gave a similar account. Biden says he has not seen intelligence indicating that Americans are unable to get to the airport. Does that square with Pannell’s reporting? “I mean, just totally not,” the foreign correspondent said.

Americans aren’t the only ones in a hurry to leave, and Biden said Friday that Afghan allies would not be left behind. Will he commit to evacuating those Afghans who assisted in the war effort? he was asked. “Yes,” the president said, “we’re making the same commitment.”

That promise is being put to the test. Before Biden’s remarks, one Senate Republican told RCP about an Afghan who had helped the Americans and who has a green card allowing him access to the United States. “He is at risk of being hunted by the Taliban; he made the dangerous journey to the airport and couldn’t get in due to the chaos and lack of control by U.S. military,” the senator said.

Lawmakers are already calling on the president to extend the perimeter outside the airport to make it easier for those trying to evacuate, but Biden wouldn’t commit to that on Friday. “There will be judgments made on the ground by the military commanders at the moment,” he said. “And I cannot second-guess each of those judgments to be made.” Biden added that while he didn’t rule the possibility,  such an operation “is likely to draw an awful lot of unintended consequences.”

If the president is having any second thoughts, it wasn’t evident. If anything, he doubled down on the need to withdraw from the country. “What interest do we have in Afghanistan at this point with al-Qaeda gone?” he said. “We went to Afghanistan for the express purpose of getting rid of al-Qaeda in Afghanistan as well as, as well as getting Osama bin Laden, and we did.”

Pentagon spokesman John Kirby was sheepish but matter-of-fact later when reporters pushed him to correct the commander-in-chief. “We know that al-Qaeda is a presence, as well as ISIS, in Afghanistan,” he said.

Biden also seemed totally unaware of how the withdrawal was playing on the world stage. “I have seen no question of our credibility from our allies around the world,” he said, even as condemnation was being heard around the world.

“I say this with a heavy heart and with horror over what is happening, but the early withdrawal was a serious and far-reaching miscalculation by the current administration,” Norbert Röttgen, chairman of the German Bundestag’s foreign relations committee, said earlier this week. “This does fundamental damage to the political and moral credibility of the West.”

That sentiment was echoed in the British Houses of Parliament with members there condemning the chaotic withdrawal as “catastrophic” and “shameful.” Some of the most blistering criticism came from Conservative MP Tom Tugendhat, a veteran of the war in Afghanistan. “It is nations that make war. Nations endure, mobilize, and muster,” he said in a floor speech. “Nations determine and have patience. We have demonstrated, sadly, that we in the West, the United Kingdom, does not.”

Biden called off his weekend plans in order to monitor the situation. Officials announced that rather than returning to Delaware as planned, the president will remain at the White House until at least Saturday. Harris, meanwhile, set off on a tour of Southeast Asia to reassure allies of U.S. commitments to that region.

Though the vice president remained silent at the president’s side, the date was significant for the two of them. One year ago today, Biden and Harris accepted their party’s nomination as standard-bearers. Moments before the president spoke, the Democratic National Convention sent out an email. It was a fundraising pitch to commemorate the occasion.

“Open this email to take a look at our progress thus far,” it read. The message, mostly boilerplate talking points next to splashy pictures of Biden and Harris in the White House, plugged Democratic majorities in Congress and the president’s agenda to “Build Back Better.” It did not highlight his foreign policy.

Susan Crabtree contributed to this report.

Is COVID Almost Over? | Power Line