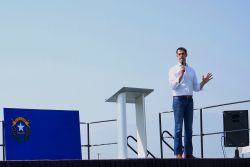 He and other Republican luminaries revved up a crowd gathered at a rural Nevada cattle ranch on Saturday, reminding the party faithful that path to wresting back the U.S. Senate in next year’s midterms could hinge on Nevada.

Sweltering sun and wildfire smoke obscuring the nearby mountains did little to blunt the energy of conservative activists at Laxalt’s 6th annual Basque Fry, an event modeled after cookouts hosted by the former Nevada Attorney General’s grandfather, U.S. Sen. Paul Laxalt — the son of a Basque immigrant sheepherder.

The event is increasingly becoming a key stop on the early presidential primary circuit, drawing rising stars hoping to strengthen their name recognition and endear themselves to voters through sampling the local fare. Unlike the pork chops and corn cobs of the Iowa State Fair, the cuisine at the Basque Fry includes beans, chorizo and — for those daring enough — the event’s signature fried lamb testicles.

Cotton, who wouldn’t say whether he planned to try the fries, compared Nevada to Arizona, Georgia and New Hampshire and said, with Adam Laxalt as a candidate, it was perhaps the Republicans’ best chance to flip a U.S. Senate seat. Laxalt has not yet announced plans to run for office.

“Adam, I guess he’s not supposed to say that he’s going to be your next United States Senator. There’s some campaign finance rules against it. But what do I care about some stupid rules like that? Adam Laxalt is going to the United States Senate for the Battle Born state in 2022,” Cotton said, speaking on a platform built atop hay bales with the vistas of the Sierra Nevadas as a backdrop.

Cotton called U.S. Sen. Catherine Cortez Masto too in step with party leadership to represent a swing state like Nevada and said taking back the U.S. Senate would allow Republicans to contain China’s growing geopolitical power, secure the U.S.-Mexico border and prevent “critical race theory” from being taught in schools.

“Nevada is a pretty evenly divided state, and she has voted for the Biden-Schumer agenda straight down the line,” Cotton said.

In Nevada, Democrats currently hold the governorship, both U.S. Senate seats and majorities in both state legislative chambers. But it’s still very much a swing state, both parties say. Biden defeated former President Donald Trump by 2.4 percentage points in the 2020 election and the past two races to represent the state in the U.S. Senate have been decided by less than five percentage points.

Florida Gov. Ron De Santis, this year’s event’s marquee speaker, canceled his in-person appearance on Friday because of a possible tropical storm in the U.S. southeast. Audience members shushed each other to hear his video message, in which he claimed to be “living rent-free in Joe Biden’s head” and encouraged Laxalt to run for Senate.

Both DeSantis and Cotton are rumored to be mulling presidential bids. But the path to the nomination depends largely on whether Trump intends to enter the race.

Republicans previewed their message for the upcoming midterm elections, stressing the power of social media platforms, crime, immigration and how schools teach children about racism’s role in U.S. history.

“Big tech has been ruthlessly enforcing the ruling elites’ worldview on everything from COVID to election integrity — you name it. If you fall from the orthodoxy, you’re going to be canceled, suspended, pulled off. Now is the time for us to stand up,” Laxalt said.

Andy Orellana, the spokesperson for the Nevada Democratic Victory group working to re-elect Cortez Masto, painted Laxalt as extreme, dishonest and said, if he runs, wouldn’t focus on Nevada issues.

“Adam Laxalt has never been honest with Nevadans — not as Attorney General, when he used his elected office to benefit his special interest donors, and not as Trump’s main lackey in Nevada, when he used his platform to spread the Big Lie and try to overturn the 2020 election,” he said. “Today’s announcement shows that he is still just focused on his D.C. allies and Trump, not Nevada.”

The stances that won the largest applause from the crowd, however, had to do with election integrity and potential fraud in the 2020 presidential race.

Former Trump administration official Ric Grenell and American Conservative Union Chairman Matt Schlapp — who in a November 2020 press conference joined Laxalt to claim Trump would have won the state of Nevada if not for voter fraud — repeated their claims about the election. Schlapp claimed Trump won the state of Nevada, and Grenell said that Democrats did not adequately investigate voter fraud.

Sam Metz is a corps member for the Associated Press/Report for America Statehouse News Initiative. Report for America is a nonprofit national service program that places journalists in local newsrooms to report on undercovered issues.

Is the pandemic responsible for America’s violent crime wave?