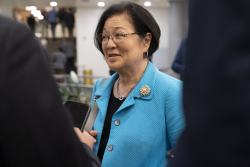 Out of the thousands of congressional staff and members working on Capitol Hill, fewer than two dozen are likely aware that elements of little-known international agreements, called Compacts of Free Association (COFA), are due to expire at the end of FY23 and FY24.  The pacts are between the United States and three countries in the Pacific — the Republic of Palau, the Republic of the Marshall Islands (RMI), and the Federated States of Micronesia (FSM). Together, these strategically located countries represent an area the size of the lower 48 states, have enormous exclusive economic zones, and are clearly a prime target for Chinese influence.

FY23/24 might seem like a long way off but, given the importance and complexity of these agreements, the congressional and budget process, and significant outstanding items, action needs to occur immediately in order to meet these deadlines. The current compacts were approved in 2003 and the economic assistance portions expire in 2023 for RMI and FSM, and 2024 for Palau.

In April, Sens. Joe Manchin and John Barrasso, the chairman and ranking member, respectively, of the Senate Energy and Natural Resources Committee, urged Secretary of State Antony Blinken and Secretary of the Interior Deb Haaland to take action “given the strategic importance of these countries to the U.S. and our allies in the region, and the emerging assertiveness of the People’s Republic of China.”  It is clear they want the administration to deliver to Congress the renewed COFA agreements for their consideration.

Hawaii’s delegation in Congress is certainly focused on this issue.  Reps. Ed Case and Kai Kahele, and Sens. Brian Schatz and Mazie Hirono have expressed concerns about the negotiations, and especially the significant social costs to Hawaii (and Guam) of Compact migrants.

These agreements emerged after the end of the United Nations Trust Territory of the Pacific Islands period following World War II.  In general, the COFA provides that in exchange for exclusive and unrestricted U.S. military access to the region, the U.S. will provide financial assistance, access to certain domestic federal programs, visa-free travel to the U.S. to work and live, and military protection.  According to the Government Accountability Office, more than 94,000 Compact migrants are now living and working in the United States.

The U.S. financial commitment to the three COFA states is currently about $4 billion over 20 years, or about $200 million per year.  However, agency heads are already making decisions on their FY23 budget requests.  Those decisions will be “locked in” next month with OMB beginning its review after Labor Day.

Yet several major items remain outstanding in the negotiations, including: Who pays and who manages the program — Interior or State? And of interest to Hawaii and the Pacific Territories, how is the U.S. going to provide for the increased costs of Compact migrants?  Also, how will the U.S. deal with “new” items brought up by the COFA countries, such as nuclear legacy costs and environmental contamination? Finally, is the U.S. going to continue providing U.S. Postal Service to the region?  These are not easy matters to settle.

After former Secretary of State Mike Pompeo announced the initiation of formal Compact negotiations in August 2019, staff from the National Security Council, the Departments of State, Interior, and Defense and other agencies worked on this matter.  Two principal co-negotiators were appointed: U.S. Ambassador Karen Stewart and me (as assistant secretary for insular and international affairs at Interior).  Yet my former position remains unfilled. In contrast, I was nominated by President Trump in June of 2017 and confirmed by the Senate in September.

The Biden administration should:

Second, complete the negotiations with the COFA countries and submit the proposed legislative package to Congress as soon as possible.

The United States has had an investment in the Pacific region since WWII.  In return, the region has enjoyed 75 years of peace. The people of Palau, RMI, and FSM are our friends and allies.  We owe it to them to complete these agreements on time as U.S. funding is critical to their health, education, and development budgets. If we do not maintain this relationship, China will step in.

Vote For Us, Please! | Power Line