Olympic gymnast Simone Biles said Monday evening that she is “very much” pro-abortion as “someone who was in the foster care system.”

The gymnast discussed her stance on abortion as she joked with her Instagram followers Monday evening about unpopular opinions on avocados and ketchup, Beyoncé, The Office and more, until a follower sent her a message that said “abortion is wrong :).”

“I already know this is going to start the biggest argument & may even lose followers BUT. I’m very much pro-choice,” she said in an Instagram story post. “Your body. Your choice.” 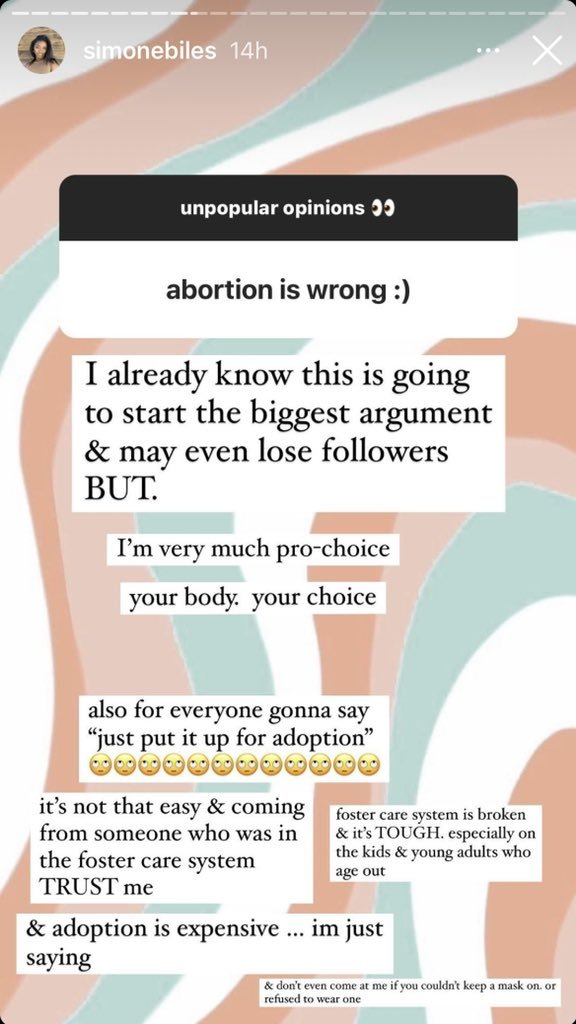 Biles also criticized those who suggest putting a baby up for adoption, saying, “It’s not that easy & coming from someone who was in the foster care system TRUST me. & adoption is expensive…I’m just saying. Foster care system is broken & it’s TOUGH. Especially on the kids & young adults who age out.”

“& don’t even come at me if you couldn’t keep a mask on. Or refuse to wear one,” the gymnast added.

Biles quickly drew fire on social media for her remarks.

“Simone Biles just announced on Instagram that she is very ‘pro-choice’ because ‘the foster care system is broken,’” tweeted Live Action Founder and President Lila Rose. “Incredibly sad and awful. To have overcome a broken system as triumphantly as she has— yet wish death for other kids bc they may face foster care is beyond fathoming.”

Our modern mindset is so broken & cruel:

“My life can overcome great odds but others’ can’t.”

“Born people deserve to live but not little unborn people.”

“Foster care and adoption can be broken so let’s support killing off would be adoptees before birth.”

“Our modern mindset is so broken & cruel,” Rose continued. “’My life can overcome great odds but others’ can’t.’ ‘Born people deserve to live but not little unborn people.’ ‘Foster care and adoption can be broken so let’s support killing off would be adoptees before birth.’”

Others applauded the gymnast for speaking up in defense of abortion, such as Virginia Democratic National Committee member Atima Omara, who praised Biles for using her platform to “lead the way.”

Between Allyson Felix starting a childcare fund for Olympic mom athletes at the Tokyo Games and Simone Biles setting boundaries for her safety and now unabashedly supporting abortion access, I’m here for Black women athletes using their platforms to lead the way pic.twitter.com/DCDkxLTdDd

The Dark Side of Paradise: A Brief History of America’s Utopian Experiments in Communal Living