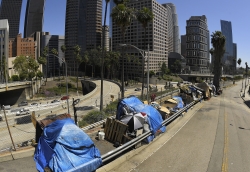 “We can end homelessness in the State of California,” California Gov. Gavin Newsom declared Monday. It’s a goal Newsom shares with President Joe Biden, despite Democrats’ inability to curb homelessness by throwing money at it.

Their solution? Throw more money at it.

It’s an odd assertion given that Newsom has been working to eradicate homelessness since before he was elected San Francisco mayor in 2003.

“I’ve lived in San Francisco this entire time,” San Francisco attorney Harmeet Dhillon told me. “He did not make it any better while he was mayor. It is ten times worse than it was before.”

When he ran for governor in 2018, Newsom pledged to reduce homelessness. Instead, the “unsheltered population” — the term for homeless people who are sleeping outdoors, in cars or other places not meant for human habitation — spiked up by 24% from 2018 to 2020, despite the Golden State spending $13 billion on homelessness since 2018, according to CalMatters.

The “housing first” approach is embraced by Newsom and advocates for more programs that “are not specifically dedicated to ending homelessness” and instead put a premium on getting those without shelter into housing.

On the one hand, you can credit Newsom for not giving up and being willing to try new things to solve what many see as an intractable problem. He’s pushing for more housing units, and he knows that goal entails eliminating obstacles to building more housing in a state where NIMBYs rule.

On the other hand, it’s hard to see how Newsom gets to where he wants to be without pushing robust police participation.

And it’s hard to see how Biden following the same approach will decrease the number of homeless nationally — more than 580,000 in 2020.

In 2015, when I was working for the San Francisco Chronicle, I asked police on the homeless beat what they thought San Francisco should do to alleviate the numbers of street people. None of them suggested more permanent housing.

California’s vaunted tolerance has ended up enabling bad behavior and made the unthinkable ubiquitous.

Offering housing units to people who won’t accept them doesn’t work for the general taxpaying public. Neither does acceptance of the sort of antisocial, self-destructive behavior that leads to blight.

Taxpayers don’t want to see or smell tent cities. Any homeless plan that does not take into account what the taxpaying public wants is doomed to fail.

So, when Democrats such as Newsom say they’re going to throw more money at homelessness, how should the public react? Dhillon’s response: “If you subsidize something, you’re going to get more of it.”

CNN Hits Apathetic ‘White Moderates’ Amid ‘Autocracy and Even Fascism’