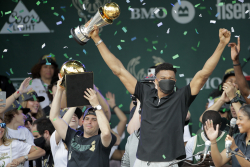 On Tuesday night, the Milwaukee Bucks captured their first NBA championship since 1971. Despite the lack of titles, we Wisconsinites love our sports. I grew up listening to my father and uncles talk about the glorious 1982 Milwaukee Brewers (who lost Game 7 of the World Series to the St. Louis Cardinals). My buddies and I still talk about the 2001 Milwaukee Bucks (and the Glenn Robinson jumper that rimmed out in Game 7 of the Eastern Conference finals against the 76ers). More recently, the University of Wisconsin Badgers’ basketball team has made a habit of getting to the Final Four only to come up just short. Even the beloved Packers, who gave Green Bay the moniker “Title Town,” have experienced stretches of mediocrity despite featuring two of the best quarterbacks in NFL history.

But this Bucks team was different. Led by the amazing Giannis Antetokounmpo, the team secured the state’s first major championship since the Packers’ 2010 Super Bowl win. In the deciding Game 6, Giannis turned in a performance for the ages, scoring 50 points (including his stunning success from the free-throw line). As Wisconsin basks in the glory, it is worth keeping in mind how the Bucks got to this point and the important role the state’s conservatives played in ensuring this moment was possible.

During Games 4 and 6, the packed Fiserv Forum literally shook, and on Tuesday night over 65,000 additional fans packed the Deer District just outside the arena. The story of the Fiserv arena offers proof that the bold reforms ushered in during Republican Gov. Scott Walker’s era included a long-term vision for economic development based on true public-private partnerships, not the phony ones that far too many taxpayers have had hoisted upon them.

Following the 2014 sale of the franchise by longtime Bucks owner (and former U.S. senator) Herb Kohl to hedge-fund managers Marc Lasry and Wes Edens, the NBA made it clear if the Bucks did not upgrade the aging Bradley Center, the team would be purchased by the NBA and sent off to Las Vegas or Seattle. Unlike other boondoggles, Kohl (pictured) and the new ownership group put up $250 million while the remaining cost (the total came to around $524 million) came from state income tax revenue, a ticket surcharge, $4 million annually from Milwaukee County, $47 million from the City of Milwaukee, and $203 million in Wisconsin Center District bonding.

Would the billionaire owners have had the ability to pay for the entire construction package? Probably. In a perfect world, should Wisconsin taxpayers have been forced to shoulder the load? No. But the reality at the time was that the Wisconsin legislature, under the leadership of state Sen. Scott Fitzgerald (now a member of Congress) and longtime Speaker Robin Vos, and Gov. Walker and his team ushered through the financing plan. Without their work, which was aided by the state’s largest business lobby (the Metropolitan Milwaukee Association of Commerce), NBA fans could very well have been left watching a Finals played between the Phoenix Suns and Las Vegas Bucks. Despite opposition from some Milwaukee Democrats, legislators like my former boss, Sen. Duey Stroebel, who represented districts that straddled metro Milwaukee and more rural communities, were forced to take a tough vote to keep the team in Milwaukee.  As a result of this bold leadership, the financing package ultimately garnered bipartisan support in both chambers.

At a time when big markets seem to be getting bigger and sports superstars seem to be getting more arrogant, there is something refreshing about the small-market Bucks. Giannis stunned the sports world when he decided he was content in little old Milwaukee. Yes, the Bucks agreeing to pay him an annual salary of $44 million over the next four years was sweet, but today’s superstars also think in terms of big markets and endorsement deals.  But Giannis is unlike today’s typical superstar, or marginal journeyman benchwarmer for that matter. Recently when asked how he figured out the “ego part,” he observed that the second one starts thinking about their awesome statistics, the next day they’re “going to suck.” He added that focusing on the past is ego, focusing on the future is pride, but focusing on the present is humility – just enjoying the game and competing at a high level. Less profoundly, he admitted after Game 4 that he has been subbing out early from games to “take a tinkle.” But it’s that type of genuineness that makes fans young and old pull so hard for him and his teammates.

The jury is still out on whether public financing arrangements like the one that made the Fiserv Forum possible directly benefits taxpayers. Critics of such deals raise legitimate free-market concerns. However, had Wisconsin conservatives not stepped forward to assist, Wisconsin would have lost an asset and the city’s Deer District would be nothing more than an aging basketball skeleton. Instead, as the Bucks took the court Tuesday night, a full house was present in the Fiserv Forum, 65,000 plus were cheering (and spending money in nearby bars and restaurants) outside, and viewers across the state witnessed a historic performance by Giannis and his teammates.

Everyone should be thankful that in 2015 Wisconsin conservatives did not let the team leave on their watch. Instead, they rolled up their sleeves and ensured the Bucks would remain part of the state’s amazing economic comeback. And because of their efforts, Wisconsin will be able to proudly feature a humble and hungry role model like Giannis for years to come.

Jake Curtis is a Milwaukee lawyer and formerly served as a department chief legal counsel in the Walker administration as well as an associate counsel at the Wisconsin Institute for Law & Liberty.

ABC Fire Drama: ‘Being Black in America Is a Life Threatening Condition’