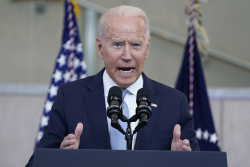 Starting even before his inauguration and continuing right through to the end of his first term, how many times were we told with absolute confidence that the facts had caught up with President Trump and he would be forced to resign or face impeachment? That he was running scared? That the jig was up?

Well, the worm has turned, and now it’s my pleasure to announce that six months into Joe Biden’s own first term, the walls are closing in. If he isn’t on the verge of being forced to resign or face impeachment yet, the only thing saving him is a Democratic majority in the House, but that firewall is in danger of crumbling in the 2022 election.

So why is Biden in trouble? Simple, because he doesn’t yet — despite the Democratic Party’s best efforts — control all aspects of media and government. Yes, most of the media remain cheerleaders for the left, but disturbing facts keep surfacing about illegal immigration, about unconstitutional mandates, and about fraudulent votes. In particular, since the federal system allows (at least for now) individual states the power to regulate elections, we keep finding out more and more about what happened in the swing states on Nov. 3, 2020. Most significantly, and to the absolute terror of Joe Biden and his allies, three states have begun investigations into the legitimacy of the 2020 presidential election.

First up was Arizona, where Biden was declared the victor by fewer than 11,000 votes out of more than 3.3 million cast. That state’s Republican governor certified the results despite being presented with considerable evidence of fraud, and yet the Republican-controlled legislature was unsatisfied the official count could be trusted. As a result, the Arizona Senate ordered a recount and forensic audit of the ballots in Maricopa County, the state’s most populous county, to determine if the alleged irregularities could be found. A private firm, Cyber Ninjas, was hired to complete the audit, and has made a preliminary report to the state Senate. That was enough for one senator, Wendy Rogers, to call for decertifying Biden’s victory in the state.

“I have heard enough,” Rogers tweeted. “With the tens of thousands of ballots mailed without being requested, the over ten thousand people who voted after registering after November 3rd, the failure of Maricopa to turn over the 40% machines, the passwords that Dominion still refuses to turn over, & tens of thousands of unauthorized queries demonstrating how insecure the election was, I call for the Biden electors to be recalled to Arizona & a new election must be conducted. Arizona’s electors must not be awarded fraudulently & we need to get this right.”

Reallocating Arizona’s 11 electors would not change the result of Biden’s 306-232 victory in the Electoral College. But we’re not done. Georgia’s election has been suspect since the vote-counting was halted on election night in the Democrat strongholds of Fulton County and Atlanta. When Trump’s attorney Rudy Giuliani produced surveillance video of election workers sending poll watchers home and then rolling out ballots that were hidden underneath a table, suspicions were heightened. The video also appears to show ballots being counted multiple times. But the Republican governor and secretary of state couldn’t find anything amiss. They not only certified the election; they told the world that Trump was a liar. Most importantly, Gov. Brian Kemp refused to call a special session of the state legislature that would have had authority to investigate alleged fraud in the election.

If Kemp had anything to hide, he probably thought that he was safe by shutting down further inquiry. But a number of citizens went to court to demand access to the ballots. Garland Favorito and the VoterGA nonprofit obtained access to some ballot images from Fulton County, and last week they presented evidence that they said proved the election was “riddled with massive errors and provable fraud.” It was certainly distressing to see ballot batches that contained 554 votes for Biden, 140 votes for Trump and 11 votes for Jo Jorgensen listed as containing 850 votes for Biden. That doesn’t even make sense as plain math.

Why don’t Democrats care about evidence of at best carelessness and at worst criminal activity in Georgia and elsewhere? And why won’t Republican leaders lift a finger to help Trump? No matter how often they call claims of voter fraud “baseless,” the evidence doesn’t lie, and there is plenty of evidence, with more to come.

A Georgia judge is still considering whether to open Fulton County’s ballots to a full review in response to VoterGA’s lawsuit. Bottom line: The people should have a right to inspect the mechanism being used to select their representatives to ensure both accuracy and fairness. Any less robs them of their sovereignty. If the level of error found so far can be proven on a larger scale, then Biden’s victory in Georgia must come under doubt. His margin of victory was even smaller there than in Arizona, just 11,779 votes out of nearly 5 million cast.

No wonder Biden is getting nervous. If Georgia’s 16 electoral votes swung to Trump along with those of Arizona, Biden’s total would shrink to 279, just barely above the 270 he needed to be named president.

Which brings us to Pennsylvania, fortuitously known as the Keystone State. Pennsylvania’s 20 electoral votes — if they had been incorrectly awarded to Biden — would be more than enough, in conjunction with Arizona and Georgia, to throw the 2020 presidential election into doubt. Of course, Biden had a larger cushion here, winning by 80,555 votes in the official tally, but that’s out of nearly 7 million votes cast.

What makes Pennsylvania so intriguing is that Trump led by more than 700,000 votes after most of the votes were counted, but then the nation went to bed and the votes stopped being counted. By the time we woke up, Biden had nearly caught up and with the benefit of late votes and late rule changes, eventually he passed Trump and took the lead. Democrats didn’t seem bothered by reports of urban precincts where Republicans were not allowed to observe the vote count. Neither did judges. Nor did anyone other than Trump’s lawyers seem curious about a report of completed ballots being trucked into the state from New York.

Giuliani appeared before a legislative hearing in November to expose the irregularities that had been reported, especially in Philadelphia, and he begged the assembled lawmakers to heed the testimony of witnesses and affidavits that swore there was something rotten in the state of Pennsylvania. One legislator who listened was Republican Sen. Doug Mastriano, who, as chair of the Intergovernmental Operations Committee, issued a request on July 7 to several counties to begin taking steps to hold a forensic audit of the 2020 election.

Democrats immediately balked at cooperating with the Senate investigation, almost as if they were worried about what the audit might reveal. Most tellingly, Biden hastily scheduled a visit to Philadelphia where he called proponents of election reform and transparency “an example of human nature at its worst, something darker and more sinister.” He called the citizen-led drive to audit the election results “the most significant test of our democracy since the Civil War.” He’s right, just not in the way he meant it.

Our democracy is being tested. Some of us want to know (if the election were truly as secure as Biden claims!) why Democrats are doing everything in their power to prevent the people from seeing the ballots, from accessing the voting machines and from confirming the chain of custody. What are they afraid of?

Maybe they are afraid of 259, the number of electoral votes that Biden would have if the election results from Arizona, Georgia and Pennsylvania were decertified. Remember, you need 270 votes to be elected president, and more and more people are wondering whether or not Joe Biden really was duly elected.

Let’s face it: This was not supposed to happen. The joint congressional session on Jan. 6, 2021, was supposed to put an end to all doubt. It was the last chance for the federal government to object to the results of the election, and various Republican senators and members of Congress were indeed going to object, but because of the incursion into the Capitol building that occurred that day, the best chance to publicly expose a national scandal evaporated as the media manufactured its last hit job on President Trump.

Remember the second bogus impeachment of Trump, the one that happened after he was no longer president? The one that claimed he had led an “insurrection” against the United States? Don’t forget, that was intended specifically to punish Trump for raising questions about the 2020 election — as if the very idea of a fraudulent election in the United States was beyond the pale.

Trump and his voters were supposed to shut up after that ignominious spectacle. No further discussion of voter fraud was to be allowed. At least, that was the hope of CNN and MSNBC and their operatives in Congress. Trump was supposed to be crushed once and for all, and to scurry away in shame, never to be heard from again. Except something went wrong with the plan. Trump wriggled out of danger again, and now he looks for all the world like the leading candidate to oppose Joe Biden in 2024 — if, that is, Biden’s presidency survives the peoples’ crusade for an election audit.

The walls are closing in, but this time it isn’t Trump who will be running scared.

What Biden's Dismal Polling Teaches Us About Our Leadership and Ourselves