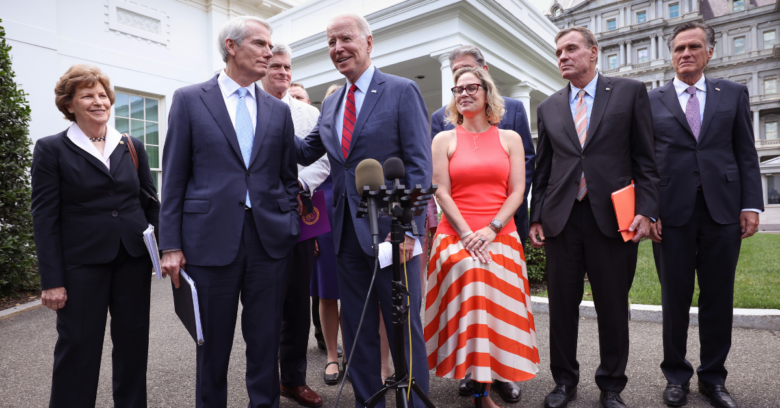 Bipartisan negotiators have dropped stronger tax enforcement from the $579 billion infrastructure bill that Democrats want to advance this week as Republicans seek to finalize how the plan will be paid for, a key GOP senator said.

Senator Rob Portman said further meetings are planned on Sunday. The increased funding for the Internal Revenue Service as a way to boost tax revenue was dropped after it emerged that Democrats intend to include the measure in their bigger budget bill that’s running on a parallel track, the Ohio Republican said on CNN’s “State of the Union.”

This week is shaping up as key for President Joe Biden’s agenda after Senate Majority Leader Chuck Schumer said he’s seeking to set up an initial vote on the infrastructure package on Wednesday. The continued search for new ways of paying for the spending, including possible changes to Medicare mentioned by Portman, will make meeting the Wednesday deadline difficult.

“We’re still working on it,” Portman said on CNN. “It’s more important to get it right than to meet an arbitrary deadline.”

Even without the tax enforcement provisions, there are other ways to finance the plan, Portman said.

“And in terms of IRS reform, or IRS tax gap, which is what was in the original proposal, that will no longer be in our proposal,” he said. “It will be in the larger reconciliation bill, we are told.”

The senators in the bipartisan group backed off the tax enforcement plan after the Congressional Budget Office declined to credit them with a projected $100 billion in net new revenue from a planned $40 billion increase in IRS funding.

Conservative groups mobilized against increasing tax enforcement in recent weeks, arguing it would lead to harassment of law-abiding ordinary taxpayers.

Senator Bill Cassidy, a Louisiana Republican who’s also part of a core group of senators negotiating the bill, said how to pay for the measures remains a sticking point.

“It can absolutely happen, but you need the pay-fors,” Cassidy said on “Fox News Sunday.” “We can get it done, but if they refuse to cooperate on the pay-fors it’s not going to pass.”

Cassidy and Portman were among a group of senators who joined Biden at the White House in June to announce the deal was moving ahead.

The Senate is proceeding with a two-pronged approach to enacting Biden’s agenda, a $3.5 trillion tax and social spending plan, backed only by Democrats, and the bipartisan infrastructure bill.

Portman said the infrastructure talks involving 11 Republicans and 11 Democrats should be allowed to run their course and produce legislation “when it’s ready.”

“We have a situation now in our country where we do have crumbling infrastructure,” he said. “It’s hurting our efficiency, therefore our productivity and our competitiveness. China spends about three or four times more on infrastructure than we do, as an example.”

Biden said last week “we’re in good shape” on the infrastructure bill, though there might be “some slight adjustments of the pay-fors.”

“You got to remember, we have an agreement,” he said.

Is Forcing Private Schools To Mask Up A Veiled Threat To Religious Liberty?