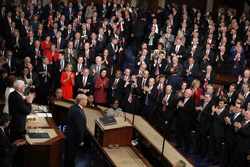 As the U.S. Census Bureau releases data for redistricting next month, the initial state population tallies cost several states representation within the U.S. House of Representatives. The initial apportionment of the 435 seats based upon population led to reduced members for California, Illinois, Michigan, Ohio, New York, Pennsylvania, and West Virginia. However, it would be incorrect to say that these states lost representation due to a shrinking population; with the exception of Illinois and West Virginia, each of these states grew in population size. Rather, the decision by Congress to artificially cap the House at 435 members created a zero-sum environment where states only gain representation if they grow at a greater rate than their fellow states. The cap at 435 members itself is less a choice than a historical accident from the 1920s, and flies in the face of legislative chamber size in nearly every other industrialized representative-democracy in the world. America should follow the rest of the world and finally allow the House to grow with the nation’s population, thereby solving a long engrained obstacle to effective representation.

There is nothing sacred about the number 435 in regards to representation. The Constitution and ensuing amendments never established a hard ceiling on the size of the House. Article 1, Section 2 sets a starting ratio of one representative for every 30,000 people within a state, with at least one representative per state. Applying this original ratio to the modern day, the size of the House would be 10,000 members, which is clearly too large. But the Constitution does allow Congress to change the ratio of members to state populations following each census via reapportionment acts.

Our current cap arose from a historical accident of procrastination and gridlocked politics, which led to a hasty and ruinous compromise. Up until 1920, the House and Senate successfully passed a new apportionment act, without fail, every decade. In 1920, rural states frustrated with the increased pivot in representation towards urban areas — in combination with House members already attempting to minimize the number of seats added following every Census — led to gridlock on the issue. The gridlock froze representation in place at 435 members, as allocated in 1911, leading to great population discrepancies between and within states.

The failure to reapportion also led to the repeal of regulations on how to draw districts, which included that districts be compact, contiguous, and as equally populous as possible. While the tension between rural and urban representatives did not diminish over the 1920s, pressure to reapportion eventually led Congress to pass the Reapportionment Act of 1929. Progressives encouraged representatives to remove politics from the equation in apportionment under the new law, which automated the process by which the national government allocated representation to states, and capped the House at 435 members. The 1929 law also failed to reintroduce federal regulations on how to draw districts, leading to some of the greatest disparities in population equality and oddly shaped districts in U.S. history, which finally forced the Supreme Court to enter into the politics of redistricting around 30 years later.

Understanding the Apportionment Act of 1929 makes evident that there is no mathematical or well-founded politically principled reason for 435 members; it was largely an accident. Due to the freeze at 435 members, the average House district now represents over 760,000 people, which is set to increase to over 800,000 by 2030. Worse yet, House members effectively represent more constituents than every other major Organisation of Economic Co-operation and Development country in the world. Pakistan ranks second to the U.S. at just under 600,000 people per district, and most other countries, such as the U.K., have well under 200,000 people. What distinguishes the U.S. relative to other OECD countries is that the size of its lower legislative chamber shares more similarities with competitive oligarchical/authoritarian nations such as Russia, China, Brazil and Pakistan, than actual representative democracies, such as Canada, the Netherlands, and Germany.

Increasing the size of the House therefore appears like a straightforward way to reform some obvious obstacles to representation. The question then arises: How large should it be? A House of 10,000 members is certainly too large for any business to be accomplished. As Madison noted in Federalist 55, “Had every Athenian citizen been a Socrates, every Athenian assembly would still have been a mob.” It turns out, however, that there is a general mathematical rule, the cube-root rule, that most other industrialized democracies follow. Following the rule, 435 seats would be appropriate for a nation with a population of about 82 million. With the U.S. population around 330 million, we should now have around 691 seats. A House with that many members would result in an average district size of around 480,000 constituents, approximating the size of districts in the 1970s. While increasing the chamber to 691 might be too large of an increase for a single apportionment, it is possible to make strides to such a number over time. At this point, any marginal increase in size would be an improvement to the status quo.

While increasing the size of the House sounds contentious, it is within the realm of possibility given that only the basic passage of a law is necessary. That said, it is important to keep a few issues in mind. First, it would be necessary to increase the physical size of the U.S. Capitol to hold more members. The need for a larger building is also a strong argument to phase in the increase over time. Second, should a new law end the automatic apportionment, there is the danger for a similar gridlock arising from polarization and leading to another failure to apportion. Therefore, some type of fail-safe should be implemented if the House and Senate do not to act. That said, such a fail-safe should not automatically freeze the House at its current size, lest we end up in the same situation we are currently in.

Finally, political scientist Chris Mooney finds that larger legislative assemblies tend to be associated with party and chamber leaders taking greater power for themselves in order to get any work done within the legislature. Therefore, there is the potential for an overly large House to empower party leaders and heighten national-level polarization. There is little point in attempting to strengthen the link between constituents and their representatives, only to have their ability to pursue nonpartisan work thwarted by a leader- and party-dominated House. A balance must be struck, and the U.S. House should not be increased any larger than it needs to. The cube-root rule should almost certainly act as a ceiling, not a floor.

It’s likely too late to increase the size of the House this apportionment cycle, though it is definitely a reform that needs to be seriously explored and prepared for well before the 2030 Census. Unfreezing the House size might not be a magic bullet to reforming our national political structure, but it would aid in correcting severe foundational inequities. Beyond increasing the connection between constituents and their representatives, it also makes it more difficult to gerrymander and prevents states from losing representatives should future states be added. Undoing the Apportionment Act of 1929 is not the solution to all of America’s problems. However, it is a fix that would apply the founding principles to the House while at the same time bringing it more fully into the 21st century.

John Curiel, Ph.D., is a research scientist at the MIT Elections Data and Science Lab. The information and opinions expressed in this column represent his own views and research, and do not necessarily represent the opinions of the MIT Election Lab or MIT.

Dumber Than a Pet Rock

America Has Always Been a Gorgeous Mosaic

As an Industry Faces Destruction, It Grows a Voting Coalition