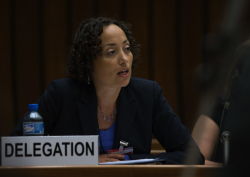 Discussing the independent counsel’s office in Morrison v. Olson, perhaps his most famous dissent, Justice Antonin Scalia cautioned that “this wolf comes as a wolf.” On Tuesday, Catherine Lhamon’s confirmation hearing to return as head of the Office for Civil Rights brought Scalia’s memorable line to mind.

During Lhamon’s first stint running OCR from 2013 through 2016, the office used guidance documents to quietly interpret Title IX to require one-sided sexual misconduct adjudication procedures. (A typical headline from the era: “How a little-known education office has forced far-reaching changes to campus sex assault investigations.”) Colleges quickly fell in line, implementing what former Education Secretary Betsy DeVos later described as “kangaroo courts.” The result was  a wave of lawsuits from students accused of sexual misconduct, but not afforded any due process by their schools.

Still, the effects of biased campus procedures remained below the radar, attracting scant congressional or media interest. A more candid administrator nonetheless might have conceded the harm that her policies had caused. At the least, Lhamon could have framed the trampling of innocent students’ rights as a necessary sacrifice to achieve the greater good of vindicating victims’ claims. A few congressional Democrats, such as Patty Murray and Jackie Speier, moved in that direction after Barack Obama left office.

Lhamon, however, remained all but silent on the issue of due process while at OCR. Then, out of office, she preposterously presented herself as a champion of accused students’ rights.

While Joe Biden long has favored using Title IX to undermine due process principles, it might have seemed prudent for him to take a lower-key approach to the issue as president. He had, after all, faced a sexual assault allegation himself, one he consistently described as false, which should have made him more empathetic to what wrongly accused students experience. Scores of federal court decisions cast doubt on Obama-era Title IX procedures, raising questions whether a return to the past was possible in this area. And DeVos’ decision to change Title IX procedures through regulations will be time-consuming to undo.

That Lhamon was selected to return to OCR showed that on Title IX, the Biden administration chose defiance rather than accommodation with the new political or legal realities. Unlike her first stint in the office, however, this time Lhamon faced some resistance on Tuesday. Two riveting exchanges with committee Republicans made clear her extremism even to casual observers.

The first came when the committee’s ranking Republican, Richard Burr of North Carolina, pressed for her opinions on key elements of the current regulations, such as cross-examination, access to evidence, and the need for a hearing. Lhamon consistently demurred, saying merely that she would enforce the current law.

Burr then asked whether Lhamon favored the presumption of innocence for accused students. The nominee denied, inaccurately, that the regulations contained such a provision. Lhamon later conceded her misstatement, but still refused to endorse the bedrock American principle of the presumption of innocence. She argued instead that Title IX adjudicators “should be open to the possibility” that an accused student might not be guilty—hardly a reassuring standard.

Louisiana Sen. Bill Cassidy  wondered aloud about Lhamon’s inflammatory tweet that the DeVos regulations took “us back to the bad old days, that predate my birth, when it was permissible to rape and sexually harass students with impunity.” During her unsuccessful bid to become OMB director, even Neera Tanden walked back the worst of her tweets. Lhamon similarly could have apologized and said she got caught up in the heat of the moment.

Instead, she doubled down on her analysis, reiterating that she still believed that “the regulation permits students to rape and sexually harass with impunity.” When Cassidy asked her for an example to corroborate this extraordinary claim, Lhamon cited no allegation against any students since the regulation went into effect last August. Instead, she recalled one of the allegations against serial sex offender Larry Nassar (who, as former USA Gymnastics national team doctor, obviously wasn’t a student), years before the current regulations took effect.

That she so clearly misunderstands the regulations she purportedly would enforce should be grounds, in and of itself, to disqualify Lhamon. The remark also exposed the ugly foundations of her beliefs. As civil liberties lawyer Ken White observed, the comment showed how “the totalitarian concept that due process protections allow criminals to act with impunity is a constant narrative from both right and left.”

During a pre-hearing meeting with Burr, Lhamon challenged the portrayal of her as someone who only believed complainants. Her performance during the confirmation hearing confirmed that perception. Regarding campus due process, in this case the wolf really comes as a wolf.

KC Johnson is co-author, with Stuart Taylor Jr., of “The Campus Rape Frenzy: The Attack on Due Process at America’s Universities” (Encounter, 2017).