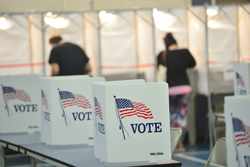 I like to apply free market analysis to American politics. Within established laws, politicians compete for votes and are rewarded for maximizing voters’ preferences. As in economics, there are sometimes market failures, but mostly the system seems to be self-regulating.

This sounds nice, but it doesn’t seem to describe what’s been happening over the past five or so years. Both parties seem to be ignoring voters’ clear signals. Neither seems to be rationally maximizing its votes and its chances of winning presidential elections or congressional majorities.

National Democrats have indeed won the popular vote in six of the last seven presidential elections, but they in only four did they have comfortable Electoral College majorities. Hillary Clinton lost 46 crucial electoral votes to Donald Trump by 77,736 votes in three states in 2016. In 2020, Joe Biden won 37 crucial electoral votes by an even smaller 42,918 votes.

Democrats’ positions on issues have given them a large electorate largely clustered in central cities, sympathetic suburbs and university towns. That puts them at a disadvantage in the Electoral College and in congressional and legislative contests in equal-population districts, because Republican voters are spread more evenly around the rest of the country.

Republicans’ position is no stronger. In four White House years, Donald Trump failed to make significant net gains as other re-elected Republican presidents (Eisenhower, Nixon, Reagan, George W. Bush) did. Trump’s claims that he somehow won the 2020 election “in a landslide” might have more moral standing if he had not trailed Biden by 7 million popular votes.

Trump did make gains among demographic groups over previous Republican presidential nominees — among non-college whites in 2016, and among Hispanics in 2020. But his percentage of the popular vote went up by 0.9%.

Neither party’s pols or primary voters have paid much heed to these signals.

But Democrats haven’t done much to win marginal constituencies beyond their base. Their politicians and primary voters have moved sharply to the left over the 15 years, as the liberal blogger Kevin Drum, citing Pew Research data, argues. The Biden administration has ratified this leftward movement, proposing federal takeover of elections, repeal of the 1996 welfare reform, the highest tax rates since the 1970s and explicit racial preferences in farmer aid and small business relief. Biden’s immigration policy is essentially open borders, and he downplays equality of opportunity in favor of equality of results (“equity”).

Most Biden proposals are in predictable trouble given Democrats’ thin (51-50, 222-213) margins in Congress and their unpopularity among voters. To which Democrats’ response is, “let’s change the system.” Abolish the Senate filibuster. Pass statehood for the District of Columbia and — although half its voters have opposed it for years — Puerto Rico. Pack the Supreme Court.

Previous presidents (Dwight Eisenhower, Bill Clinton) modified their parties’ policies after it took shellackings in election after election. Biden and Democratic congressional leaders seem bent on pushing as many unpopular policies as possible, as long as their tenuous majorities last.

That may be a while if Trump continues to dominate the political landscape. Trump can claim some unique policy successes — tax cuts and immigration policies that channeled economic gains disproportionately to low-wage workers, development and approval of COVID vaccines months before “experts” thought possible.

But his non-credible insistence that he won the 2020 election combines his solipsism with rear-view-mirror vision — an election-losing formula. True, Democrats like Hillary Clinton, who supported Georgia Democrat Stacey Abrams’s claim she won in 2018, are not well-positioned to criticize him. Nor are Democrats and journalists who spent two years hyping the Russia collusion hoax well-positioned to charge he’s pushing conspiracy theories.

It’s not clear how many Republicans see their party as a Trump party and how many think it might do better in 2024 by nominating a candidate younger than 78 who can salute Trump’s political and policy successes unburdened by his personal baggage.

Will either party start responding rationally to signals in the political marketplace any time soon? The signs are not propitious. Consider Democrats’ anguished attacks on state voting law changes as “voter suppression” — even though nonpartisan research shows they have little effect on turnout.

Georgia, for example, has seen record turnout increases, and national turnout as the percentage of eligible voters in 2020 was the highest since 1900. New York City, with election laws much more restrictive than those Democrats criticize, just recorded its the second highest (after 1989) mayoral primary turnout primary in history, and the (anti-police-defunding) nominee was the choice of most Black voters.

Democrats have been allowing players with adolescent mindsets to determine their policies, and Republicans have been embracing a leader with adolescent behavior control problems. It’s time for the parties to grow up and pay attention to the signals and cues voters are sending them in the political marketplace.

Michael Barone is senior political analyst for  the Washington Examiner, resident fellow at American Enterprise Institute and longtime co-author of The Almanac of American Politics.

And the Golden Turkey Award Goes To…

Did wokeism cost the U.S. Olympic medals? Of course not.

In the matter of Nicole Malliotakis