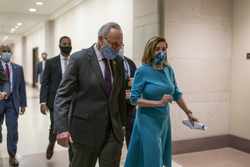 Congressional Democrats and their media allies are using Thursday’s Supreme Court ruling upholding Arizona’s anti-fraud voting laws as a pretext to ram through a federal takeover of elections. The Democrats’ legislation, the For the People Act, makes widespread election stealing possible to lock in a permanent Democratic majority.

Chuck Schumer is bashing the justices’ ruling as “one of the darkest days in all of the Supreme Court’s history.” The New York Times editorial board calls Arizona’s laws “an attack on democracy.”

Disregard this phony hand-wringing. The justices, by a 6-3 majority, found no evidence -that Arizona’s voting laws put minority voters at a disadvantage or made voting too hard. Truth is, explained Justice Samuel Alito, “Arizona law generally makes it very easy to vote.”

Alito explained that states have the authority to pass “nondiscriminatory voting rules” to deter fraud. That’s what Arizona did. Arizona requires that voters cast ballots in their assigned precinct, and it outlaws the sleazy practice of ballot harvesting, where paid workers walk through neighborhoods, knock on doors and offer to help residents return the ballots they’ve received in the mail.

Ballot harvesting invites cheating, since harvesters invariably are trying to get a particular candidate elected.

As for charges the Court is failing to protect democracy, Alito explained that “there’s nothing democratic” about robbing state legislatures of their authority over elections and handing it to unelected federal courts.

Or to Congress, as Biden, Schumer and House Speaker Nancy Pelosi want to do.

These pols are distorting Thursday’s ruling into an urgent call to enact the For the People Act, also dubbed H.R. 1., as if it’s a civil rights imperative.

The New York Times claims “Republican-controlled legislatures across the country have raced one another to pass laws that make voting harder.” Untrue. They’re making cheating harder.

Alito explained that voting is much easier than it was in 1982, when the pertinent section of the Voting Rights Act was adopted. Back then, “states typically required nearly all voters to cast their ballots in person on election day and allowed only narrow and tightly defined categories of voters to cast absentee ballots.”

States gradually adopted early voting and voting by mail. But the pandemic produced the biggest changes, resulting in election night chaos and skepticism.

Now states are reforming their laws, which the Constitution empowers them to do.

Europeans get it. To deter fraud, three quarters of European countries either bar absentee voting or require showing a photo ID to get a ballot.

But H.R. 1 forces states to mail absentee ballots to all voters and allow harvesting.

H.R.1 also compels states to automatically register everyone to vote when they sign up for food assistance, unemployment benefits or other government support. That includes noncitizens, unless they declare themselves ineligible.

It bans photo ID requirements. Anyone can show up on Election Day to vote and simply sign a statement claiming to be registered.

Senate Democrats don’t have 60 votes to overcome a filibuster and bring H.R. 1 to a vote. They’d like to pass it by August in order to change voting laws nationwide before the midterm elections. The goal is to do what the Supreme Court refused to do: Eliminate election provisions that target fraud.

Since Thursday’s decision, Democrats and the media have ramped up demands to end the filibuster and pass the bill with a simple majority. The New York Times declared that “the ball is in Congress’s court and time is fast running out.”

The Times claims H.R. 1 would “restore the heart of the Voting Rights Act.” Nonsense. Discrimination against minority voters is already illegal, as it should be.

Let’s get real. HR 1 is a corrupt scheme to make cheating widespread.