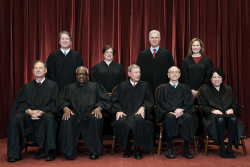 One of the little pleasures of June, at least for Supreme Court watchers, is a game I call “Supreme Court Bingo.” Through it, we can get some idea of who is writing key opinions at the end of the court’s term, and get a sneak peek at the future of American law.

To understand how this works, one must understand the rhythms of the esteemed body. The high court hears a set number of cases each month; after oral argument, the justices meet in their conference room, alone, to discuss and debate the cases. They vote, and then the senior justice in the majority assigns an author to the case. The chief justice is treated as the most senior justice, therefore John Roberts outranks Clarence Thomas and Stephen Breyer even though they were appointed to the court before he was.

This can be consequential. If you can figure out who’s writing an opinion, you know that jurist is in the majority. So if Sonia Sotomayor is in the majority, you can be fairly confident that the opinion will not be strongly conservative. Likewise, a Thomas opinion is unlikely to be far to the left. Moreover, it can tell us something about the tone and reasoning of the opinion. Thomas is not known for writing a narrow opinion; in a narrow outcome he’s more likely to be concurring than the primary author.

How do we figure out authorship ahead of time? The justices also try their best to keep the number of opinions even each month, and across the term. As the term goes on and the justices announce their opinions, it narrows the list of potential authors for each remaining opinion.

The game is usually more fun than it will be in the current term, because the court typically hands down its biggest decisions last. This term, there is only one potential blockbuster remaining, and one less-important case that nevertheless has potentially important ramifications. Nevertheless, it is still a worthy endeavor.

There are five opinions remaining to be handed down. It turns out that if you assign one opinion each to justices Elena Kagan and Amy Barrett, one to Roberts, and two to Samuel Alito, you end up with an outcome where Thomas has authored seven opinions, Barrett has authored five (she was not yet on the court for October arguments), and everyone else has authored six. Moreover, you can do this while keeping the number of cases assigned each month roughly equal.

The easiest case to figure out is also the most significant: Brnovich v. Democratic National Committee. Because it is so important, we’ll return to it later to discuss it in more detail. The only justices who have not authored a case from February are Thomas, Breyer, Alito, and Brett Kavanaugh. Thomas has already produced seven cases this term, so he is clearly not the author. Breyer and Kavanaugh have produced six. It is possible that one of them is writing Brnovich, if Alito lost his majority from someone switching their vote (either on this case or some other case). But that’s not the most likely outcome; Alito almost certainly is writing Brnovich. Again, more on this later.

There are three opinions from April still outstanding. Two of them involve patent law and an energy statute (called “FERC”) and are of little consequence. The third, Americans for Prosperity v. Bonta, involves the constitutionality of donor disclosure requirements and could have far-reaching consequences for campaign finance law down the road. Neither Barrett nor Roberts has written a decision this month, which features 13 rulings overall; they almost certainly have two of these opinions, and either Alito or Kagan has one.

Obviously, liberals would prefer it if Kagan wrote the AFP decision. However, if one had to bet, the smart money would probably be on her writing the patent law decision, if only because she has carved out a bit of a niche on the court in that area. Regardless, whomever of Alito or Kagan is not writing an opinion in April is probably writing Johnson v. Guzman Chavez, the only case remaining from January. This case involves the process for removing persons in the U.S. illegally, and is relatively narrow in scope.

Let’s return now to Brnovich, which is a potentially explosive opinion requiring some backstory to explain. There are two major aspects to the Voting Rights Act of 1965: Section 2 and Section 5. We can break the laws reviewed under this statute into two rough prongs: vote dilution cases, which typically arise out of redistricting, and vote suppression cases, which arise out of changes to voter laws (for an example, liberals bring photo identification law cases as vote suppression cases).

Section 5 requires certain states with a history of discrimination to ask for federal permission before they can change laws or regulations related to elections. In part because of this, the body of law surrounding vote suppression cases is not particularly well-developed; the most far-reaching laws were smothered in the crib (because every state must redistrict, we still get a fair number of dilution cases).

When the Supreme Court struck down the formula for deciding which states would be covered under Section 5, states were given wider latitude in changing their election laws. We’ve seen a proliferation of vote suppression claims in the past decade, with little Supreme Court guidance as to what the proper standard would be.

Brnovich, which involves a pair of statutory provisions that ban ballot collection and require officials to reject ballots for statewide office cast in the wrong precinct, gives the Supreme Court an opportunity to provide such clarification. Because there’s relatively little precedent in this field, it also has wide latitude in the type of opinion that would be written.

Last week there were three potential authors for the opinion: Breyer, Kavanaugh, and Alito. Had Breyer been the author, he likely would have written a very narrow, fact-specific opinion, perhaps reversing the Ninth Circuit (which struck down the Arizona statute in question) on procedural grounds, such as standing. But then he produced the opinion in Mahanoy Area School District v. B.L., a First Amendment case, likely ending his writing for the term.

All eyes were then on Brett Kavanaugh. Because he is a fairly junior justice, he would only be assigned the opinion. The speculation was that the chief justice might have assigned him an opinion that would be right-of-center, but perhaps fact-specific or narrow in scope. But then Kavanaugh wrote his sixth opinion in TransUnion v. Ramirez, likely ending his writing for the term.

That left Sam Alito as the obvious potential author. Alito is one of the most conservative justices on a court with six right-of-center justices, and he has expressed frustration with Roberts’ penchant for narrow decisions. Whatever he is writing, it is unlikely to be limited.

The question, then, is just how broad his opinion will be. There are a number of standards that the court could announce for these claims, and Alito would not necessarily have to endorse the broadest one. It’s entirely possible that he was assigned an opinion by the chief that endorses a standard that is not palatable to liberals, but that doesn’t give conservatives everything that they want.

Another possibility looms, however. Roberts might not be in the majority; instead we could see a 5-4 split, as we saw in some of the COVID-related religious freedom cases, where justices Thomas, Alito, Neil Gorsuch, Kavanaugh, and Barrett form a majority, leaving the chief justice to dissent or write a narrower concurring opinion, perhaps joined by the liberal bloc.

If the chief justice is in dissent, Thomas would be the assigning justice, and he would likely be content to assign this opinion to Alito, who is probably the closest justice, ideologically speaking, to himself. Along these lines, since the chief gets first “dibs” on opinions, Roberts typically takes the more interesting cases for himself, especially when blockbuster decisions on race are being handed down. It seems unlikely he would take a pass on this case, although anything is possible.

Of course, there are other possibilities; this is ultimately just informed speculation. Alito could have lost his majority, or he could be authoring an opinion for a badly divided court for which he is the “author” in name only.

Overall, we might do some back-of-the-envelope odds-making as follows: A 5% chance Alito isn’t the author; a 20% chance there is a badly fractured opinion, of which Alito is the technical author; a 25% chance of Alito writing a 6-3 conservative opinion; and a 40% chance he’s writing a 5-4 “Katie-bar-the-door” decision.

‘Clarice’ Introduces BLM Narrative to ‘Silence of the Lambs’

A New Crisis for Climate Science?