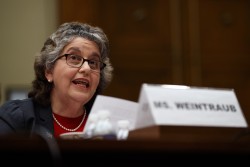 Imagine you are accused of a crime. Fortunately for you, the jury rejects the prosecution’s case. But the judge disagrees with the verdict. He pretends the jury has not reached a decision, and announces that the trial will continue, but no sign of when. Sound fair?

Incredibly, something like this is happening at the Federal Election Commission. The FEC’s Democrats are regularly refusing to dismiss complaints and notify respondents that they are in the clear when the commission has voted not to prosecute. This is a violation of due process norms and suppresses lawful free speech about politics and issues.

To understand how this has come about, it is necessary to understand the unique role and structure of the FEC. When Congress created it in the 1970s, lawmakers gave the agency sole responsibility for civil enforcement of federal campaign finance laws. It understood that the power to regulate political campaigns and speech could become a dangerous partisan weapon. Thus, the FEC was created with six commissioners, with no more than three from one party, and four votes are required to investigate and prosecute offenses. As the late Democratic Sen. Alan Cranston noted, this would prevent the FEC from becoming “a tool for harassment by future imperial presidents who may seek to repeat the abuses of Watergate.”

This structure means that some votes end in 3-3 ties. With no majority to prosecute, the commission has historically recognized that a tie goes to the speaker, and voted to “close the file,” effectively dismissing the matter.

But the commission’s three current Democrats — Ellen Weintraub, Shana Broussard, and Steven Walther — are now often refusing to close files after losing a vote to prosecute. Broussard, the chairwoman, has further ruled that four votes are required merely to close the file. (In fact, the law specifies which matters need four votes, and closing a file does not.) Since the file is not closed, no one — not even the respondent — is notified that the case has been effectively dismissed. This leaves respondents in legal limbo, unaware that the FEC ruled in their favor. The delay also allows the original complaining party to sue, alleging that the FEC failed to act on the complaint. Meanwhile, other speakers avoid engaging in similar speech in the incorrect belief that the FEC may determine it is illegal.

This is the epitome of bad government. But the three Democrats are making it worse: They are also refusing to allow the FEC’s attorneys to defend the agency’s decision in court, an action which does require four votes. Since the FEC can’t explain or defend its decision, the court issues a default judgment against the commission. The Democratic commissioners are effectively committing a fraud on the courts, making it appear that the FEC has not acted when it has.

With the FEC on the sidelines, respondents are forced into expensive litigation at the hands of the complainant. The Democrats are functionally turning the interpretation and civil prosecution of campaign finance law over to private, partisan actors, contrary to Congress’s intent.

This practice almost certainly violates the oath these commissioners took to “faithfully discharge the duties of the office.” At a minimum, this oath means respecting losses on substantive votes, honestly representing FEC actions in court, and notifying respondents when they are no longer subject to investigation.

So far only Weintraub — who has been serving as an acting commissioner since her appointed six-year term expired 14 years ago (the Democrats have refused to nominate a replacement) — is willing to publicly defend this practice. She claims she is “just trying to get the law enforced.” What she means is simply that the Republican commissioners have disagreed with her over whether certain behavior actually violates the law. Weintraub doesn’t allege that the Republicans have used their authority on a partisan basis, and the record is clear that they have not. Her complaint of Republican “obstruction” also rings hollow because two of the three GOP commissioners have served less than six months, and the third barely a year.

As a former FEC commissioner, I know how frustrating it sometimes is to be on the losing end of a vote. But I would never have dreamed of abusing my power in the manner of the three serving Democrats. They should be ashamed, especially Chair Broussard, who at her confirmation hearing last November promised that she would be “measured, impartial, and focused on building consensus,” with “an aim towards promoting transparency.”

Americans appearing before the FEC deserve to be treated fairly — which at least ought to mean being notified when they are no longer under investigation — and federal judges deserve honest representation about the commission’s decisions.

Meanwhile, Democrats in Congress are trying to pass H.R. 1/S. 1, which would reconstitute the FEC as five-member commission, with a majority appointed by President Biden. If this is how Democrats act on a bipartisan commission, imagine the abuses of power that would come from a partisan FEC majority.

Time for Trudeau to Concede: The Truckers Have Won

TV Network Standards, Then and Now