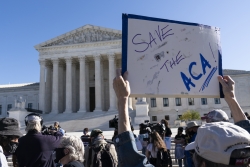 They tried. Oh, they tried. Republicans spent a decade bashing and voting to dismantle the Affordable Care Act. And what did they get for all their trouble? A 7-2 ruling by a conservative Supreme Court to uphold the health insurance program also known as “Obamacare.”

For that, Republicans should thank their lucky stars. There would have been unlovely consequences had they succeeded in killing a government program that secured health coverage for 23 million Americans.

Could it be that their attacks and thrusts to repeal the ACA were really just an act? Republicans passed several bills to do in the ACA during the Obama administration, resting assured that the former president would veto them.

After 2016, Republicans controlled the White House and both houses of Congress but still failed to deep-six the ACA. Republican John McCain famously stopped a serious repeal effort with his one vote in the Senate. Though pilloried for that, he had saved his party from having to deal with the inevitable fallout.

Targeting the ACA worked early on politically when the kinks were still being ironed out and the program was hard to explain. Once millions of Americans started experiencing the benefits, the tack turned to promises to put something better in its place.

In 2016, Donald Trump ran for the presidency promising to replace Obamacare with “something terrific.” As you know, nothing emerged.

One of the problems with offering to replace a popular program is that you really do have to come up with a replacement. There were (and remain) a few conservative health care experts ready to develop alternatives, but they have been largely ignored by the politicians.

With a few exceptions, Republicans simply aren’t interested in doing the work on health care, which requires accepting trade-offs. There was all this talk, for example, about getting rid of funding for Obamacare but keeping coverage for preexisting conditions. An insurance market couldn’t function if people could sign up for coverage  after they’ve become sick and, therefore, expensive enrollees.

Where does the health care debate go from here?

Republicans have turned to a more specialized complaint centered on the “public option.” This would be a government-run plan that competes with private offerings on the ACA Marketplace.

Texas Sen. Ted Cruz recently condemned a Democratic proposal as “a stepping stone toward a single-payer public option system, which would eliminate private health insurance.” And the Senate Republican Policy Committee is peddling the notion that Democratic support for a public option is a push for a “fully government-run health system.”

None of this is quite true. How a public option might affect private insurers would depend on how the public option is structured. (Sorry, everybody, but the details matter.)

The real problem with throwing thunderbolts at the public option is that Democratic leaders aren’t currently pushing for one. They want to avoid a fight with insurers, providers and others who profit off the high cost of American health care.

And so, Democrats are focusing on the simple, easier stuff, such as lowering the eligibility age of Medicare, now 65, to something like 60. And they are addressing the scourge of outlandish prescription drug prices, something the Trump administration said it would do but didn’t.

Of course, Congress should let Medicare negotiate for lower drug prices. Democrats have backed that for a long time, and lest we forget, so did Trump during his first presidential campaign.

Saved from taking the rap for strangling Obamacare, Republicans should know they have alternatives to nibbling at it on the edges. They could become deeply involved in developing a rational health care system that the ACA only got rolling. How ’bout it?

Biden to desecrate 9/11 remotely too