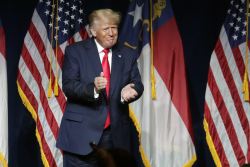 You probably heard it reported a few weeks ago that Donald Trump has been telling confidants that he expects to be reinstated as president in August. I have no way of knowing if that story is accurate, nor does New York Times correspondent Maggie Haberman, who reported it, but we do know that Mike Lindell, the CEO of MyPillow, has boasted that he has evidence of election fraud that will force the Supreme Court to unanimously overturn the Nov. 3 election and put Trump back in power within six weeks.

No doubt that is far-fetched, but it raises the fascinating theoretical question of what would happen if a presidential election were indeed proven to be stolen. What would be the recourse? Or would the nation just have to accept its illegitimate ruler the way they do in corrupt Third World countries?

Mind you, this is hypothetical only, so Facebook and Twitter and any other Big Tech tyrants have no reason to censor or suppress this line of inquiry. It is what educators used to encourage in their students — critical thinking, looking at an issue from all sides and without preconditions in order to form a judgment.

But critical thinking is in short supply in 21st century America. Instead, we have either orthodoxy or heresy. Of course, the New York Times can write whatever it wants in the way of fantastic stories about the Nov. 3 election, because it writes stories that ridicule Trump and his claims of election fraud. But for those of us who respond to the Times or other left-leaning news outlets, the same rules don’t apply.

Last week, for instance, I reprinted a story by RealClearInvestigations reporter Paul Sperry on my own website about the evidence for election fraud in Georgia. When I posted it to Facebook with a comment praising Sperry’s work as clear evidence why a forensic election audit is vital, the post was shut down. I was told it “goes against [Facebook’s] community standards,” with no further explanation.

Apparently asking questions about elections goes against Facebook’s standards, which suggests that Facebook’s standards have more in common with the Chinese Communist Party than with the U.S. Constitution. Asking questions — about anything and everything — is what journalists are paid to do, and what informed citizens must do. You don’t accept anything the government tells you at face value. You test it, you probe it, you prove it.

So first off, let me say that my expectation is that no matter what happens, no matter what is proven about election fraud, Donald Trump is unlikely to be restored as president in August. Yes, there are a few cases in state courts where election results have been put aside and the losing candidate was elevated to office after fraud was proven. Most notably, in 1998, the incumbent mayor of Miami, Joe Carollo, lost in a runoff election, resulting in his opponent unseating him. It turned out, however, that hundreds of absentee ballots were fraudulent, and a court of appeals reversed the election and reinstated Carollo as mayor.

That’s what Lindell — and maybe Trump — is hoping will happen in August, but the main factor weighing against such an outcome is the U.S. Constitution, which is silent on voter fraud but lays out pretty strict guidelines for how and when a president may be removed from office. None of those guidelines, however, seem to apply to the present hypothetical case. Assuming that  voter fraud was ever proven in court, and to a sufficient degree that it would reverse the Electoral College results, there is simply no provision in the Constitution that would unambiguously resolve the situation.

So, with your critical-thinking hat on, imagine how you would address the problem — hypothetical only — of what to do if it became obvious that the sitting president were not duly elected. Let’s say that evidence surfaced showing that China tampered with the election in order to oust Trump. What does the Supreme Court do?

Could the court rely on a process argument to avoid making a ruling? Would the court fall back on “lack of standing” or “moot” or “too late”? Remember, the hypothesis is that a foreign power interfered in a U.S. presidential election. Does anyone really think that our high court justices would turn their heads and ignore evidence that Joe Biden was elected not by the American people but by the Chinese Communist Party? I don’t. So in that extreme case, the court would have to do something that courts don’t like to do — make it up as it goes along.

You see, the Constitution only allows a president to be removed by Congress through impeachment or by the vice president and Cabinet invoking the 25th Amendment to declare the president “unable to discharge the powers and duties of his office.” But if the court were convinced that the president had won his office as a result of fraud, and especially a foreign conspiracy, could it merely wait for the political process of impeachment to take care of the problem? That seems unlikely to me, especially in the hyper-partisan environment we live in today. Democrats in Congress would be likely rally around their tainted president rather than sacrifice their progressive agenda. The vice president would herself be subject to the same questions of illegitimacy as the president, so would not be considered fit to serve either.

It would therefore be up to the Supreme Court justices to solve the problem, rather than ignore it, as much as they would wish to. My guess is that they would hew as closely to the declared intent of the Constitution as possible, and to existing case law. In my mind, that means they would honor the mandated order of succession for the presidency: If both Biden and Harris were removed from office, the presidency would fall not to Donald Trump, but to Nancy Pelosi, who as speaker of the House is second in line to the presidency. Trump may have been cheated out of the office, but the Constitution provides no remedy for that, short of the Electoral College or Congress rejecting fraudulent results prior to the inauguration, a remedy that is indeed “moot” and “too late” in the present instance.

But that does not mean Trump can never return to the White House. Nor must he necessarily wait until the 2024 election. If Pelosi were named president, it is presumed that she would remain in an acting role until such time as a new president was elected or she was replaced as speaker. That’s because the Presidential Succession Act refers to officers beyond the vice president “acting as president” rather than “becoming” president.

That would in essence turn the 2022 election into a parliamentary election to determine the next president. If the Democrats won the House in 2022, Pelosi could finish her term as president, but if Republicans won, the new GOP speaker would presumably be sworn in as the new acting president.

That raises the fascinating possibility of Republicans running for House in the 2022 election on the pledge that if the GOP retakes the chamber, the party will name Donald Trump as speaker. That could happen even if Trump doesn’t run for a House seat himself since there is no constitutional requirement that the speaker be a member of the House.

So maybe Trump won’t be president in August of 2021, but he well could be in January of 2023. This, of course, is all hypothetical at this point, merely an exercise in critical thinking.  No need for Mark Zuckerberg, Jack Dorsey and the Big Tech Gestapo to get worried — yet. But that won’t stop them from imposing their “community standards” on me and millions of others. Turns out that asking questions is dangerous, because sometimes you get answers. We can’t have that now, can we?

The merit of meritocracy | Power Line

Don Lemon: Okay to Trash Tim Scott as an ‘Oreo’ in Private?