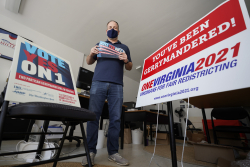 The House of Representatives and Senate face an impasse over a host of issues, perhaps most importantly of all H.R. 1, also known as the For the People Act, an elections and redistricting-reform bill sponsored by congressional Democrats. H.R. 1 reflects a long-held desire by redistricting-reform activists to reassign the task of redistricting congressional districts from state legislatures to independent commissions. Organizations such as Common Cause argue that the move to independent commissions would remove individuals with the most vested interests from the process, preventing them from putting their own personal and partisan goals ahead of community interests.

Research suggests that these independent commissions draw more competitive districts than those drawn by state legislatures. Leading constitutional law expert Richard Pildes makes a strong case that more competitive districts can, in turn, provide the incentives for representatives to take more moderate positions, thereby lessening polarization within Congress. Redistricting definitely has a role to play in potentially depolarizing the House, but the nationalization of American politics, the power of primaries, and single-member districts might lead to self-reinforcing of political polarization. Solving redistricting at this point might not be sufficient.

The long-held theoretical means by which gerrymandering causes polarization is by removing the electoral incentive for representatives to moderate their positions. With a district solidly in favor of one party, representatives need only concern themselves with their primary electorate. Pildes makes a similar argument, and my own research confirms that it is easier for challengers to adapt their ideological positions to appeal to the primary electorate relative to the incumbent.

Republicans efficiently spread their supporters across districts by packing Democrats into relatively few districts, with margins 80-20 in favor of Democrats and 60-40 in favor of Republicans during the 2010 redistricting cycle, for example. Following the 2020 election, Republicans seem set to repeat the strategy this coming cycle, maximizing their advantage in seats despite their lack of popularity. Independent commissions might not eliminate the residential patterns of Democrats that make it easier for Republicans to secure legislative majorities, but they might reduce the threshold to a level where it’s possible for Democrats to translate their popular majorities into governing ones.

The problem is highlighted in recent research by Stefan Krasa and Mattias Polborn, who offer strong evidence that the nationalization of politics, combined with the primary system, can allow party loyalists to thwart the will of general-election-only voters. Unlike in gubernatorial elections, voters in congressional elections vote not only for the individual but also for the majority party for the chamber. Voters might support an individual candidate’s demeanor and qualities but dislike his party’s national positions sufficiently to decline voting him into office.

Krasa and Polborn cite  the case of Lincoln Chafee as an example. Despite being the most liberal Republican in the U.S. Senate, the longtime Rhode Island incumbent lost his seat in the general election following Democrats’ successful attempt to nationalize the 2006 midterms by galvanizing opposition to then-President George W. Bush. When voters sense stark differences between the parties and feel that their congressional race might decide the outcome, the individual characteristics of their candidates matter less compared to the national party positions. As Krasa and Polborn demonstrate through their game-theoretical models, primary voters realize and take advantage of nationalized elections to force upon general-election-only voters candidates more extreme than they would prefer. Even if the individual candidate takes extreme positions, voting for an extreme candidate of the same party is the better alternative than letting the opposing party take power.

Given the way primary voters can take advantage of the forced-choice nature of single-member winner-take-all districts, reforming redistricting would not be enough by itself to make the House less polarized. Research by political scientist Gary Jacobson demonstrates that, during the 2020 elections, views about Donald Trump dominated congressional elections to the point that the impact of campaign expenditures amounted to effectively nothing. Yet Trump’s outsized impact is only part of a long-running trend where national and presidential politics dominate every other dimension.

Even if competition in House races returned to levels seen in the 1990s, the current national-level polarization is strong enough to prevent voters from voting for the individual candidate over the party. The Senate’s actions, or lack thereof, also supports Jacobson’s findings from mass surveys. Unlike the House, the Senate is not subject to redistricting. Though it is not possible to gerrymander a state, partisanship likewise dominates the upper chamber. Despite an attack on the Capitol meant to overturn an election, only six Republicans sided with Democrats in favor of an investigatory bipartisan commission on the incident. Further, Minority Leader Mitch McConnell lobbied his party to vote against the commission, demonstrating that party leadership views party solidarity as paramount.

If we accept the reasonable assumption that investigating an attack on the fabric of our system of government is about as bipartisan a topic as can be imagined, then we have a ceiling of just over 10% of Republicans willing to cross the aisle when gerrymandering is not a concern. This leaves little hope that redistricting reform will act as a cure-all.

What can be done about redistricting? Unfortunately, with moderate Sens. Joe Manchin and Kyrsten Sinema protecting the Senate filibuster, not much at the national level. Likewise, Republicans have no reason to give up their power in states such as Wisconsin and North Carolina where they control redistricting.

A possible national-level solution more amenable to Republicans might be to increase the size of the House, which has been capped at 435 members since 1913. Political scientists Francis Lee and Bruce Oppenheimer suggest that increasing the House at a ratio followed by other Western democracies – the cube-root rule – would lessen state legislatures’ ability to manipulate district boundaries. Such a change would increase the size of the House to over 544 members and would need only legislation, as opposed to a constitutional amendment, to implement. Republicans would presumably have no reason to go along with such legislation, however, if they did not see it as advantageous to them; and Democratic representatives might likewise not enjoy the loss of their individual power. With more representatives, the power of any single representative diminishes. Additionally, increased chamber size would increase the power of party leaders, which could further nationalize politics.

A less aggressive approach might be to encourage states to redistrict in a manner – such as not splitting ZIP codes and similar geographies – that preserves the ability of constituents to communicate with their representatives. Redistricting in a manner where representatives could more easily figure out whom they represent could allow for some dimension other than party to play a role in elections, empowering individual candidates. Likewise, such districts could lower the cost of campaigning and allow for more responsiveness. The Republican National Committee professed a deep concern over communities of interest and existing boundaries in their amicus brief for Gill v. Whitford, which ended redistricting litigation at the national level. Even if Republicans came on board for such a scheme, though, such effects would be marginal and pale in comparison to the overwhelming effect of partisanship on the opinions and actions of representatives. Likewise, such reforms to preserve boundaries don’t answer the question as to how the Senate became so polarized even in the absence of gerrymandering.

Overall, while it is unclear if a bill similar to H.R. 1 might pass, such a solution is unfortunately no longer sufficient. In the best-case scenario, national-level polarization has already reached the point where politicians are willing to put party over country. Further, the primary system of selecting officeholders, in combination with polarization, is sufficient to effectively eliminate any meaningful choice during the general election. The U.S. has reached a point where even marginal reforms might be considered nearly miraculous.

John Curiel, Ph.D., is a research scientist at the MIT Elections Data and Science Lab. The information and opinions expressed in this column represent his own views and research, and do not necessarily represent the opinions of the MIT Election Lab or MIT.

He’s BACK! Chris Matthews Appears on MSNBC For the First Time Since Losing His Show

Editor’s Pick: TheBlaze on NYT Discovering Dems ‘Are the Problem’