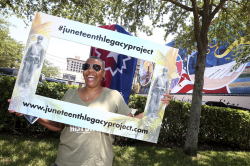 Today is a brand-new federal holiday, although Juneteenth is hardly a new idea in the collective consciousness of black America. It dates, as the whole country now knows, to June 19, 1865. On that date, Gordon Granger, the U.S. Army commander of the Union forces occupying Galveston, issued a general order that essentially required recalcitrant whites in Texas to honor an earlier wartime order issued by Abraham Lincoln: the Emancipation Proclamation.

And though “Juneteenth” is an amalgamation of June and the word nineteenth, it’s actually a more precise rendition than “June 19.” The reason is that Galveston is a port city, and when Union troops arrived by ship days earlier, word began circulating among freed and enslaved African Americans along the wharf that freedom was truly at hand. A Confederate major named H.A. Wallace later recalled seeing ex-slaves shouting joyously and tossing their hats in the air at a Galveston pier on June 17, 1865. When he asked what they were celebrating, he was told, “We’s free now.”

What makes you free? Wallace asked.

“Yankees come down on ships on the outside to free us!” was the response.

Ensuing celebrations took place over the next three days — and for many years afterward in mid-June. So, it’s historically apt that President Biden signed the Juneteenth bill on June 17, that today, the 18th, is the official holiday, and that tomorrow, the 19th, is the actual anniversary for Gen. Granger’s order. For much of the rest of the 19th century, emancipation was celebrated by blacks all across the South on both June 19 and Jan. 1, the date in 1863 when Lincoln’s proclamation became official.

And yet the immediate aftermath of the Civil War was also a time for reflection, for searching, for trepidation among those who had previously been enslaved. Were they really free of white domination? How would they make a living — and where would they go? Could they reunite with family members cruelly torn from them?

When he discusses this fraught time in U.S. history, Smithsonian Institution Secretary Lonnie G. Bunch III (previously the first director of the National Museum of African American History & Culture) invokes the reaction of a former slave named Hawkins Wilson, who lived outside Galveston. His first affirmative act as a free man was to write a letter to the Freedmen’s Bureau. “I am anxious to learn about my sisters, from whom I have been separated many years,” Wilson proclaimed. “I am in hopes that they are still living.”

In a second letter, he wrote. “Your little brother Hawkins is trying to find out where you are and where his poor old mother is. I shall never forget the bag of biscuits you made for me the last night I spent with you.”

There is no evidence that this reunion ever took place, at least here on earth, but Hawkins Wilson’s letter survives as a tangible refutation to the wishful notion among some whites that the effects of slavery somehow magically ended with Lee’s surrender or Gen. Granger’s June 19, 1865, general order.

In my view, the excesses and underlying fallacies of critical race theory and its toxic cousin, “anti-racism,” should be apparent to anyone with an open mind. And it’s unfortunate that this topic has become polarized along predictable partisan lines. But it’s just as obvious to me that until recently, educators and other keepers of this country’s flame have done a woefully and willfully inadequate job of weaving the facts and stories of America’s violent racial history into our national narrative.

It’s scandalous that many white Americans are only now learning about Juneteenth. Shouldn’t as many Americans know about Hawkins Wilson’s heartbreaking search for his family as know about Pickett’s Charge? For that matter, where are the days of national recognition for the likes of Susan B. Anthony, Helen Keller, Cesar Chavez, Chief Joseph, Mas Masuda, and Frank Kameny?

Americans can be proud of their story, the true story, the un-whitewashed version. It is a story of a people forming a country in the name of freedom and then, for two-and-a-half centuries steadily extending those freedoms to formerly disadvantaged groups of people. It required argument, sacrifice, demonstration, even war, and sometimes we took one step forward and two steps back. But in the long arc of the moral universe, to use a famous phrase, our progress took us in the right direction. That is something to be celebrated. And while it can’t involve covering up the past, it certainly doesn’t entail shaming Americans because their ancestors did awful things. Instead, it requires a shared sense of purpose along with the courage to face history honestly — and, if need be, to right old wrongs. All of which can be conducted in a spirit of grace.

Carl M. Cannon is the Washington bureau chief for RealClearPolitics. Reach him on Twitter @CarlCannon.

A Conversation Where There Used To Be Tweets