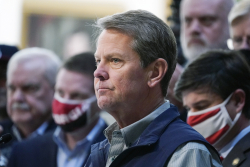 I first interviewed Georgia Gov. Brian Kemp in August of 2019. At the time, he had taken office just eight months before, and, as I sat across from him, he outlined his various priorities for the more than three years still remaining in his first term. There was a sense of optimism that summer for both Kemp and the state’s Republican Party, which at the time held every statewide elected office and prided itself on pushing pro-business policies that had driven an influx of new arrivals to Georgia from other states, including from tax-heavy ones in the Northeast.

The world has turned over many times, as they say, since that first discussion I had with the governor. In addition to casting its electoral votes for a Democratic presidential candidate in 2020 for the first time in 28 years, Georgia now has two Democratic senators, and many recent arrivals to the state appear to have brought old voting patterns with them. Interviewing Kemp earlier this month (and now for a second time), he is facing a primary challenge from the right, a steady stream of criticism from former President Donald Trump, and much of the same from his old adversaries in Georgia’s Democratic Party.

Given the amount of heat Kemp takes from all sides, one cannot help but get the sense that he is America’s most unfairly maligned politician.

His decision to sign the Election Integrity Act of 2021 in March was met with an outcry that was remarkable even by the standards of our current age of political hyperbole. The following day, President Biden called the law “Jim Crow in the 21st century” and “an atrocity.” Stacey Abrams – whom Kemp defeated in the gubernatorial race — would join in, accusing Republicans of “gaming the system.” Major League Baseball denounced the law in an over-the-top statement that made perfectly clear the organization had not even skimmed the actual text of the law before pulling this year’s All-Star Game out of Atlanta. (In reality, it is still easier to vote in Georgia than in many predominantly Democratic states, including Delaware and New Jersey.)

This was not unlike the torrent of criticism Kemp had received following other decisions during his tenure, such as signing a bill banning abortions once a fetal heartbeat is detected or his partial reopening of Georgia during the pandemic last April. In response to Kemp’s latter course of action, The Atlantic declared that it was  the state’s “experiment in human sacrifice.” (He would be vindicated when Georgia experienced fewer deaths per capita than states that opted for much stricter lockdowns.)

To make matters worse (and through no fault of his own), Kemp is also in danger of violating the first rule of electoral politics: Don’t lose your base. Egged on by statements from the former president, some hardliners in his own party continue to unfairly blame Kemp for Trump’s loss in the 2020 election.

Despite near-constant criticism, however, Kemp has kept his nose to the proverbial grindstone. He has cut through the rhetoric and patiently explained the actual facts behind his favored  proposals, while also focusing on enacting actual conservative policies. In this sense, his recent approach to governing can serve as a model for other Republicans as they look toward the 2022 election cycle: Stay calm, stick to the facts, and don’t be afraid to push back.

Kemp has kept an emphasis on policy while refraining from likely unproductive back-and-forths with Trump. Instead of wars of words, he has stuck to the issues, from his recent push to keep critical race theory out of Georgia’s schools to making good on his long-standing promises to prioritize combating human trafficking and to ensure the interests of rural Georgians are well-represented in Atlanta. He has also never allowed corporations and many in the national press to set the narrative unchallenged, instead refuting their exaggerations along the way.

Even while taking fire from all sides — from corporate America to the activist class to hard-liners in his own party — the mild-mannered governor of Georgia continues to stay the course. Unlike Lt. Gov. Geoff Duncan, Kemp has decided to press on and seek reelection. Regardless of what happens in November 2022, Kemp reminds his fellow Republicans how to choose policy over rhetoric.

Erich J. Prince is co-founder and editor of Merion West.

Can Newsom Persuade California Democrats to Save Him?

A Fond Farewell to Conan O'Brien