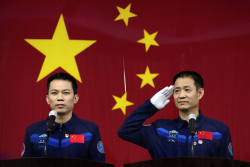 China is America’s economic rival. The way capitalists deal with rivals is to compete. President Joe Biden vows to compete with this rival on the rival’s terms. He calls it “extreme competition.”

China has built a massive semiconductor industry with massive government spending. It is about to send another $200 billion to its semiconductor sector through 2025.

The U.S. Senate, in a fit of bipartisanship, just approved spending up to about $250 billion for science research, subsidizing computer chip makers here and expanding the National Science Foundation. Europe is also spending big.

Why is this so important? Semiconductors are the little brains that now run appliances, airplanes, mobile phones and cars. You can’t have a modern economy without them.

And the reason for building up this domestic industry goes beyond creating and keeping chip-making jobs at home. As the coronavirus disrupted the world’s supply chains, U.S. manufacturers suffered a shortage of semiconductors. Our auto industry has slowed production for lack of them.

A military rival as well, China claims sovereignty over Taiwan and, some fear, could invade it. Taiwan produces over 60% of the world’s computer chips. And so, semiconductor independence has become a matter of national security.

Consider what happened when Australia called for independent investigators to be let into Wuhan to study the origins of the virus. China responded with reprisals against a variety of Australian products — coal, wine, beef, cotton and barley — exports worth about $25 billion in 2019.

The practice of governments making major investments in their own companies is called “economic nationalism.” This kind of state intervention does not sit well with some ideologies. Conservatives traditionally believe that the governments should not mess with market mechanisms. Let the private sector make such decisions.

Only one Democrat voted against the Senate bill. That was Vermont Sen. Bernie Sanders, who complained that it amounted to “corporate welfare” to big, rich companies. Suffice it to say, if the companies could have become richer doing this on their own, they would have done it.

The bottom line should be American jobs, not Sanders’ highly dated idea of how the world economy works. This spending not only creates jobs at the corporations, rich or otherwise, but also helps retain jobs at other companies slowed down by the shortage of semiconductors.

In a similar vein, the administration is now working on a plan to beef up the American manufacture of lithium-ion batteries. Used in electric cars and for storing renewable energy, these batteries are essential to a green economy. China has 93 “gigafactories” that make them. The U.S. has four.

This would be a good time to briefly compare the Biden approach to China with that of his predecessor. One of former President Donald Trump’s first actions in office was to pull the U.S. out of the Trans-Pacific Partnership. The partnership’s purpose was to help its members — about a dozen countries, including Canada, Japan and Australia — compete with China.

Sanders opposed the Trans-Pacific Partnership as well. He and Trump apparently shared an aversion to anything with the word “trade” attached. Let’s just say that had the U.S. stayed in the agreement, many of the currently disrupted supply chains might have been oriented away from China. Some might have moved to the United States.

Biden has also dispensed with the racial taunts. Which do you think concerns China more, Trump’s calling COVID-19 the “China virus” or Biden talking about “extreme competition”?

A modern economy runs on computer chips. A clean-energy future relies on lithium batteries. America cannot let China control the supply of them. Drop your purist dogmas, everybody. Economic nationalism is the future.

Biden Is Off to a Disastrous Start

Lawmakers Should Avoid Impulse to Tax All Stock Trades