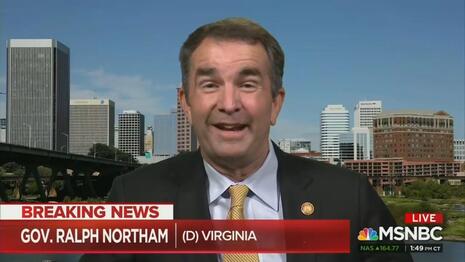 In an article published Monday morning, New York Times reporter Astead Herndon cheered the political survival of Governor Ralph Northam (D-VA) with a nauseating puff piece, celebrating how he had survived multiple blackface scandals to become a “racially progressive governor” thanks to “a complete story of personal growth” that showed “how a crisis can also provide opportunity” and give “new life” to his “political future.”

And in an accompanying interview, Herndon and Northam tag-teamed to mock opposition to critical race theory being taught in schools as “a big moral panic” and “dog whistle” that’s “use[d]” by Republicans “to frighten people.”

Herndon opened with an anecdote of one Black Virginia mayor who met Northam after the scandal and won by asking him, “what can I do for you,” Herndon boasted that, instead of resigning, Northam remained defiant and was rewarded (click “expand”):

But among Black political leaders and elected officials in Virginia, he is set to leave office with another legacy: becoming the most racially progressive governor in the state’s history, whose focus on uplifting Black communities since the 2019 scandal will have a tangible and lasting effect.

Mr. Northam’s arc, from political pariah denounced by nearly every national Democrat to a popular incumbent with support from Black elected officials and even progressive activists, is a complex story of personal growth and political pressure, a testament to how crisis can also provide opportunity. However, it would not have been possible without the Black Virginians who rallied around him even as they stared down immense pressure to help force him from office — Black staff members who stayed in the administration, a Legislative Black Caucus that chose to focus on policy goals rather than resignation, and a Black activist community that quickly followed the lawmakers’ strategic lead.

Instead of derision, Mr. Northam and the Black leaders who supported him showed the power of redemption, humility and growth.

So, just like CNN’s Jeffrey Toobin, former Congresswoman Katie Hill (D-CA), or Governor Andrew Cuomo (D-NY), the left and their media allies don’t actually care about accountability for their own side.

As for how Northam became woke and memory-holed, Herndon gushed that Northam “that it sent him on an ongoing personal journey of re-educating himself about race, racism, and whiteness” even though he “reiterated that he does not believe he was either man in the photograph.”

You see, unlike any number of examples (with Chris Harrison being the most recent example), the “experience…really opened my eyes” was enough for progressives if you’re the right person.

Herndon conceded that “[t]he national condemnations were swift and unequivocal” after the photos surfaced and that even now-President Joe Biden had said he should resign, but pivoted to rehabilitating Northam.

Describing the simultaneous sexual assault allegations against Lt. Gov. Justin Fairfax (D) and Attorney General Mark Herring (D) as “a stroke of unforeseen fortune,” Herndon revealed that Northam’s strategy quickly became one of a woke education and having Black elected officials meet Northam with “Black staff members as a go-between.”

Like any good lefty, Herndon relayed that Northam had become well-versed in “anti-racist literature,” including grifter Robin DiAngelo’s White Fragility after having led a life of shame and racism because he was — get this — too invested in medical school.

For all the laughers before this, this one in paragraph 39 took the cake: “The answer to how, exactly, Mr. Northam survived a scandal is complicated — but there is no question he survived.”

Herndon closed by hyping that “[t]he turn of events breathes new life into Mr. Northam’s political future,” which could include a second gubernatorial bid in 2025.

He added: “Mr. Northam, for his part, says that he’s a changed man, and that he understands that arenas like health care, education, business and voting rights ‘are all just full of racism and oppression.’”

Go over to the interview (entitled “Ralph Northam Reflects on His Journey Back From the Edge”) and it’s just as shameless as the two took cheap shots at the curriculum beloved by leftist educators that seeks to have white students become deeply depressed and come to realize that their very existence is oppression against their Black and Brown classmates (click “expand”):

I was reading this week about Loudoun County in Virginia, where there’s been a big moral panic around some of the books you mentioned — saying that such teachings amount to an anti-white message in critical race theory. What would you say to white parents who are frankly afraid of the things you say have helped you grow?

Critical race theory is a dog whistle that the Republicans are using to frighten people. What I’m interested in is equity.

And part of this listening tour has been with young people, and it’s helped me reflect on my own education. Because what we’re teaching, and what we’ve been taught, is not only inadequate but inaccurate. Our textbooks are inadequate and inaccurate, as is who’s teaching them.

I think there are a lot of white people that are open-minded and want to do better. And you may be able to teach them something that they never really realized. But there’s some people that don’t want to lose their parking spots.

Do you share the fears of some Democrats that what you’re describing is leaning too far into a so-called wokeness? And that it is bad politically?

No, I think the more we know about our history, the better.

But tell us more about how reconciliation breeds compassion, love, understanding, etc. Instead, it’s all about one thing for these people when it comes to their political opponents: submission.

Confessions of a Coup Plotter, or The Death of Free Speech