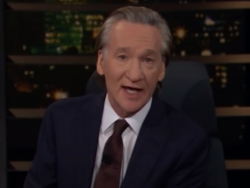 HBO’s Real Time host, Bill Maher, monologued on progressives’ view that progress has not been made in the United States on cultural issues, such as race relations and gay marriage. Maher called those on the left who believed that the United States lacked any progress had “progressophobia,” meaning “a brain disorder that strikes liberals and makes them incapable of recognizing progress.”

Maher continued, mentioning the views on gay marriage and racism have changed over the years in the United States. “This is one of the big problems with wokeness,” Maher said, “that what you say doesn’t have to make sense or jive with the facts or even be challenged lest the challenge be conflated with racism.’

“But saying that White power and privilege is at an all-time high is just ridiculous. Higher than a century ago, the year of the Tulsa Race Massacre? Higher than the years when the KKK rode unchecked and Jim Crow went unchallenged? Higher than the 1960s when The Supremes and Willie Mays still couldn’t stay at the same hotel as the White people they were working with? Higher than during slavery?”

Maher concluded his monologue by saying “[i]t’s not a sin, and it’s certainly not inaccurate, to say we’ve come a long way, baby. Not mission accomplished, just a long way.”

Is It Finally Time's Up for Grifting Women's Groups?

Media Tries to Cancel Joe Rogan Because He Terrifies Them