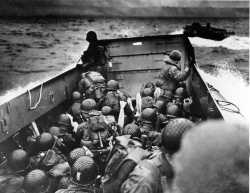 NORMANDY, France, June 6, 1944
In a surprise aggressive move, American and British troops are landing on the beaches in Normandy today. Germany’s Transocean News Service reports that Germans vacationing in the sleepy hamlets of this coastal region were awaked by the ships, planes, guns, and bombs of this sneak attack. A few brave German tourists quickly ran to bunkers and began retuning fire to protect their French brothers and sisters.
Germany has already been subject to a horrifying 363 air raids by the Allied air forces in an attempt to terrorize its citizens. British bombers have already…

CNN Slimes the NRA: They Only Support Gun Rights for White People