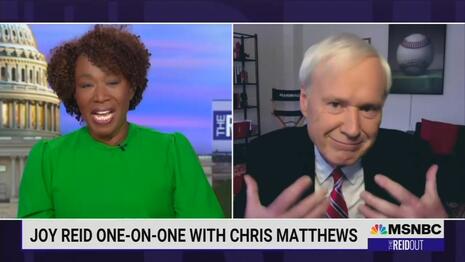 After almost a year and a half away from television, former longtime-MSNBC host Chris Matthews made his return to his old network and time slot on Tuesday’s ReidOut to promote his new book, and sound off on everything from the 2020 election to January 6 to his departure from MSNBC to infrastructure to the Peace Corps to even South African politics.

For much of the nearly 14-minute segment, Matthews seemed to have such a laundry list of things to opine on since he lost his show (over inappropriate comments to women) that it felt like he had retaken command, as if he were the host of Hardball and Joy Reid was a guest.

But for all of Matthews’s creepy, cringeworthy, far-left, and insane takes, the appearance served as a reminder of one undeniable fact about the contrast between Matthews and the hateful and more vengeful Reid: Not only did he deeply care about and love America, but he possessed a respect for the Founders.

Reid began by talking about American democracy being in danger because of Republicans and any Democrat who refuses to axe the filibuster when she boasted: “And who better to talk about the state of politics than my friend and former colleague Chris Matthews, who has a new, sweeping new memoir about his life in and out of politics.”

As soon as she said it was “good to see you, sir,” Matthews was off and running. Matthews first said he’s been “glad to see you in that seat” because she’s “certainly earned it.”

This was despite the fact that one could easily argue that loyal Hardball fill-in host and beloved political nerd Steve Kornacki would have been a more natural fit than Reid. Look no further than Kornacki’s emotional and heartfelt remarks after being forced to take over once Matthews quit at the start of an episode. But we digress.

From there, Matthews began with not so much selling book as he provided a retelling of his life and a sidenote about how the Democratic Party should make the “D” lowercase.

Reid then asked him what he made of the January 6 riot since he used to be a Capitol Police officer, but along with providing an answer to that question, Matthews did what often did on Hardball, which was wander off in directions no one could predict.

In all, his rant went on for almost five minutes and invoked birtherism, get-out-the-vote efforts, the Peace Corps, Q-Anon, and Vietnam. Here’s a sampling (click “expand”):

I felt violated, I felt the place I had worked and people I worked, devoted their lives too, including the police officers, and to see these people come in there and basically mess — massacre the place to death — and desecrate — it’s a good word — it’s a — it’s a religious term, but that’s appropriate here. They wanted to climb on ceilings and put up signs and they wanted to wear stupid costumes and act like — act like crazy people to show their content — they were looking for human beings and god knows what they would have done if they got them, including Mike Pence, Mr. Vice President, they were looking for you and they were looking for the speaker and they were looking for — to do what with? What were they going to — tar and feather them? Were they going to kill them? Were they going to make fun of them? What were they going to do? They were looking for them and it was police officers, in the end, and the staff people that got them and out of danger — and out of danger. And I’m telling you. That’s a scary thing. And then I hear about a — a — high-ranking general who took the oath to this Constitution, talking about — I don’t know when he’s going to explain himself — I don’t know to explain using the word “should” in the same preposition with military coup? What are you talking about?

[O]ne advantage of being away from daily television, being on it, and having talk everyday about what happened that day like I was in the Peace Corps in Africa, you see a pattern developing. I’m in the Peace Corps in Africa and I’m watching the bitterness grow at home against the Vietnam War. I — you could sense it by the growing dots on the screen. What are the dots on the screen in the last several months? Well, you had a President who, to start with, who said our previous President was an illegal immigrant, he was not President. He couldn’t be. Here was here illegally. He snuck in the country — an absurd, awful, racist comment. And then you have a President — former President now, thankly [sic] — thankfully —who calls this President illegal — who says he’s not President. He’s got two-thirds of the Republican Party — the party of Lincoln — saying that Joe Biden’s not President!

You know, democracy, as Jefferson taught — with all Jefferson’s faults, slavery and the rest — he did give us all people — all men are created equal. He did give us a goal, ironically, a goal. And this crowd doesn’t understand democracy. If you ask the average Republican who likes Trump, do you really want the majority to rule in this country? Simple question. Including minorities, do you think majority of American citizens should rule this country? A simple, democratic vote question. Do you think they’re going to say yes? No, they’re going to say let’s reduce the number of minority voters, let’s reduce the number of young voters too while we’re at it. And you know, you’ve been in politics and you’ve followed it more — as much as I have, despite being different ages, and I got to tell you — what was biggest call of our lives? Get out the vote. We were thrilled for people to vote. We begged them for months on this network, begged people for months before each, get out and vote, vote, vote. Said it to everybody. Whatever you are, conservative, whatever, get out there and vote. We wanted everybody to vote and then they voted and then they said it doesn’t count.

Reid was finally able to breakthrough, but not before Matthews ended on infrastructure with a crazy story about how he called up Peoria, Illinois’s chief engineer for then-House Speaker Tip O’Neill (D-MA) so they could identify structural deficit bridges in order to embarrass then-Minority Whip Bob Michel (R-IL).

Reid replied such a thing couldn’t be done nowadays because the right is so heartless they wouldn’t care if their constituents die in a bridge collapse, but Matthews showed how he was less of scorched earth politico than Reid (click “expand”):

You’ve had more recent experience with this crowd, but I got to tell you. Usually, local politicians think it’s all local and when they hear that the school bus at three o’clock this afternoon is going running across this dangerous bridge, they get some calls from the parents.

And I do think that’s how you get to people. You get them when they’re home and then they say: “This isn’t about ideology or left versus right. Are you going to fix the damned bridge or not? Are you going to fix. Cause if anything happens to that bridge, it’s your fault. So, I think old politics does work sometimes if you get them.

Reid repeatedly tried to have Matthews join her in the venomous crusade against Senator Joe Manchin (D-WV), but Matthews wouldn’t take the bait.

In fact, he schooled her by forcing her to admit there were likely far more Democratic senators that oppose axing the filibuster, yet allowed Manchin and Kyrsten Sinema (D-AZ) to take the heat, but did concede Democrats can’t go into the 2022 midterms with nothing besides COVID relief.

With time running out, Reid closed by asking Matthews to address Hardball’s sudden cancellation and discuss the “upshot” of being away from TV.

Matthews explained that one upshot has “been having a lot of people come up and say, ‘I miss you personally.’ They like you but they miss — they miss me. We had good company together. And they also say things like they said they liked how you didn’t let them get away with anything, which I love too. I was touched.”

As for what transpired with Laura Bassett’s claims of inappropriate behavior that led to his downfall, Matthews said his comments were inexcusable and he “took ownership of it, using a nice, modern phrase” by losing “my show,” but he’s moved on.

He concluded where he started, which was talking about his time with Carter, O’Neill, and Tutu as well as why he loves America and our system of government (click “expand”):

MATTHEWS: The good news is I’ve spent — I’ve never had, in my life, two years to sit down and write about my 70 years, which is to talk about an incredible life that I’ve been so lucky to have, to be on the inside of American politics looking out.  looking out. From Air Force One with Jimmy Carter — who I really love — fighting for his life against Reagan, Tip O’Neill fighting against Reagan from the back room everyday, being at the Berlin Wall on the communist side when the wall was coming down and having a young guy say to me, when I asked him, “what does freedom mean to you” — “was is Freiheit” — you know what he said? “Talking to you.”

MATTHEWS: Freedom is great. Democracy is great. And being with Archbishop Tutu, the great leader in South Africa, walking with him to the polls the first time in his life at the age of 62, he gets to vote, it was an amazing experience to work within democracy and to see parts of the world fighting for democracy like Nelson Mandela and — and —

MATTHEWS: — bringing down Berlin Wall, I got to see it all in one lifetime. I Want to share with the people who watched my show so faithfully all those years. That’s my gift in this book.

The return of kooky Matthews and the continuation of Reid’s campaign to have Manchin and Sinema join the GOP was made possible thanks to advertisers such as Applebee’s and Kraft. Their contact information is linked.

To see the full transcript of the interview, click here.

Is Joe Biden In the Pocket of the Chinese Communist Party?

Why Isn’t the Press Interested in Dem Oversight on Capitol Police After Riot?