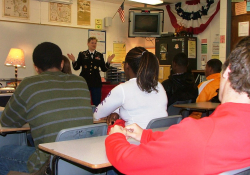 Civic education has emerged as a major front in the bitter clash spilling over into many domains between left and right in America. Since the civic-education battles revolve around the nation’s core principles and fundamental character, they may prove the decisive front.

Education in general and civic education in particular shape students’ understandings of themselves, fellow citizens, the nation, and other nations and peoples. Consequently, the outcome of the raging debate about the content and goal of civic education is bound to have a major effect on America’s ability to secure freedom and protect equality under law, provide economic opportunity and spur growth, revitalize civil society, and defend the free and open international order against antidemocratic and unfree regimes’ ambitions to bend it toward authoritarianism.

Civic education is an old idea. According to the classical tradition rooted in Plato and Aristotle, the whole of education should aim at forming the soul by cultivating the virtues. Education, in this view, involves both the training of the body through disciplined physical exertion and the formation of the mind through study of science and the humanities — not least the principles of one’s own nation’s political order. For the classical tradition, education is civic education.

To a significant extent, the modern tradition of freedom agreed, with the crucial proviso that education’s principal goal was to prepare students for the rights and responsibilities of freedom. Accordingly, liberal education puts study of the principles of a free society at the core of the curriculum. At the same time, liberal education places a good deal more emphasis than did classical education on introducing students to the diversity of views on the great moral, economic, legal, political, philosophical, and religious questions, and on equipping students to think for themselves. Such study — concentrating on great works of literature, history, philosophy, and theology — is part and parcel of civic education well understood because it cultivates the virtues of reasoned inquiry, tolerance, and civility, all of which contribute to good citizenship in a liberal democracy.

Civic education as Americans tend to think of it today involves telltale innovations. Contemporary American educators treat civic education as a specialized undertaking, walling it off from other subjects. They increasingly ascribe to it a participatory component, believing correctly that engagement in political affairs and the life of the community is an important part of citizenship in a free and democratic society while supposing dubiously that schools are well-suited to direct outside-the-classroom action. And for some time now, a large swath of American educators has treated the proposition that the United States is “systemically racist” as civic education’s indisputable premise.

In general, American progressives want more of the civic-education innovations. For them, civics is a stand-alone subject. In their view, it involves to a considerable extent, and in some cases primarily, the promotion of social justice in and beyond the classroom. Instead of concentrating on teaching the basic facts and preeminent ideas of U.S. history and exposing students to different perspectives on the American experience, progressive educators betray a tendency to inculcate as a self-evident truth that the nation was conceived in, and remains suffused with, racism.

Meanwhile, conservatives incline to the traditional view that civic education should be grounded in the study of the nation’s self-proclaimed moral and political ideas — the principles of freedom and self-government set forth in the Declaration, Constitution, and other seminal writings from the founding. Such an approach includes exploration of the many ways the nation has fallen short of its professed standards but it does so in light of the United States of America’s distinction as the first nation ever to come into existence by declaring its dedication to the universal principles of individual freedom and human equality. It also brings into focus how the American experiment in ordered liberty, despite the legal protection it gave to slavery at its founding, has made great progress in honoring unalienable rights, the securing of which, the Declaration states, is government’s first task.

In a recent Atlantic essay titled “Can Civics Save America?” distinguished journalist George Packer attempts to broker a viable accord in the civic-education battles. The country could certainly use a level-headed and intelligent mediator — not nonpartisan, necessarily, but capable of reporting the situation accurately and identifying the common ground on which education in a pluralistic and, at the moment, deeply divided, nation can take place. A writer of the center-left, Packer seems to fit the bill. He is devoted to classic liberal notions of individual freedom, human equality, toleration, civility, and reasoned discourse. In 2019, he wrote judiciously and movingly, based on his own experience as a New York City parent, about schools’ damaging efforts to inculcate progressive orthodoxy. And he recognizes that we face a dire situation in which schools today barely teach civics — that goes for the facts of American government as well as the virtues of persuasion and compromise on which liberal democracy depends — even as citizens demonstrate shocking ignorance about the basic operation of our constitutional system and trust in government plummets.

Packer’s ambitions at mediation, however, are thwarted by his softening and sprucing up of the progressive position, and his crude distortion of the conservative alternative.

Packer finds hope in an initiative led by Harvard Professor Danielle Allen and iCivics Executive Director Louise Dubé. Their report, funded by the Department of Education and the National Endowment for the Humanities, was released to the public in March. According to Packer, Educating for American Democracy “tries hard not to choose sides in the culture war.” It seeks “to reconcile love of country and its ideals with rigorous criticism of its failings.” It aims to make students “more skilled and empowered as democratic citizens.” And rather than “tell schools what to teach or students what to think,” its purpose is “to guide the education of students in how to think.”

These are admirable goals in the abstract, but Packer overlooks the invitation to politicization of the schools woven into the initiative’s emphasis on, as he puts it, “acting on issues of the present.” He dismisses Ethics and Public Policy Center Senior Fellow Stanley Kurtz’s critique of “action civics” on the strange grounds that it is unreasonable “to believe that children in 21st-century America can be made to sit quietly at their desks as they did in 1957, learning how a bill became a law.” But human nature has not changed so greatly in the last 65 years as to extinguish students’ capacity — or obviate the political imperative — to learn how government works. Nor has human nature undergone alterations that would lead one to doubt that an overwhelmingly progressive educational establishment will exploit “action civics” to enlist students in progressive causes while discouraging participation in conservative ones.

Packer, moreover, misses the pronounced leftward tilt in the accompanying Roadmap to Educating for American Democracy. Writing in City Journal, Mark Bauerlein shows that despite its conciliatory rhetoric, the initiative downplays the American founding while celebrating the history of the country’s supposed successive refoundings. The report’s decidedly progressive message is that “institutional and social transformation” counts for almost everything in civics education while preserving the nation’s constitutional heritage counts for little.

Packer would have been less likely to overlook these serious flaws in Educating for American Democracy had he paid more attention to conservative views about civic education. Instead, he derides conservatives for wanting to institute “a fixed view of civics and U.S. history in place of inquiry, debate, and disagreement.” In contrast to Packer’s caricature, however, Kurtz argues — consistent with longstanding conservative thinking — for bringing into the civics classroom that vigorous examination from many angles of important moral and political questions central to liberal education.

All Americans should want to conserve liberal education because in a free society it is the comprehensive civics education. It provides the common ground and encourages the habits of mind and heart that enable individuals with diverse backgrounds and perspectives to appreciate the nation’s core principles and fundamental character.

Not reconciled: An update | Power Line