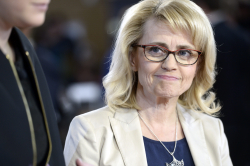 To the U.S. Commission on International Religious Freedom

The Prosecutor General of Finland has undertaken criminal prosecutions that will compel Finland’s clergy and lay religious believers to choose between prison and abandoning teachings of their various faiths.

First, Prosecutor General Raija Toiviainen has charged Dr. Päivi Räsänen, a Member of the Finland’s Parliament and former Finnish Minister of the Interior, with three counts of “ethnic agitation” for peacefully expressing her views on marriage and sexuality.  The charges against Dr. Räsänen stem from her authorship of a 2004 booklet entitled, Male and Female He Created Them: Homosexual Relationships Challenge the Christian Concept of Humanity, published by the Luther Foundation.  In the booklet, Dr. Räsänen argues that homosexual activity should be recognized by the church as sinful based on the teachings of the Hebrew Bible and Christian scripture.

Second, the Prosecutor General has charged the Bishop-Elect of the Evangelical Lutheran Mission Diocese of Finland, Rev. Dr. Juhana Pohjola, with one count of ethnic agitation for publishing Dr. Räsänen’s booklet.

The Prosecutor General’s pursuit of these charges against a prominent legislator and bishop sends an unmistakable message to Finns of every rank and station: no one who holds to the traditional teachings of Judaism, Christianity, Islam, and several other religions on questions of marriage and sexual morality will be safe from state harassment should they, like Bishop Pohjola and Dr. Räsänen, express their moral and religious convictions.

These prosecutions constitute serious human rights abuses.  They violate Article 18 of the Universal Declaration of Human Rights, Article 18 of the International Covenant on Civil and Political Rights, and Article 10 of the EU Charter of Fundamental Rights, all of which affirm the right of every human “to manifest his religion or belief in teaching.”  They likewise violate multiple provisions of the Declaration on the Elimination of All Forms of Intolerance and of Discrimination Based on Religion or Belief, including its affirmation of the right “[t]o write, issue and disseminate relevant publications” expressing one’s religious beliefs.

These prosecutions cannot be understood as mundane applications of a European-style “hate speech” law.  No reasonable balance of the goods of public order, civil equality, and religious liberty can ever support this suppression of the right to believe and express one’s beliefs.  The prosecutions are straightforward acts of oppression.

To uphold the internationally recognized rights of freedom of expression and religious liberty, the United States must now respond to the abuses in Finland as it has recently responded to other violations of religious liberty in non-western nations.

For example, in 2020, the Department of State designated the chief of the Xiamen Public Security Bureau as a human rights abuser under Section 7031(c) of the Department of State, Foreign Operations, and Related Programs Appropriations Act of 2020, for his involvement in the detention and interrogation of Falun Gong practitioners for practicing their beliefs.  In 2020 and 2021, the Departments of Treasury and State likewise designated multiple Chinese officials in Xinjiang for their roles in the detention of Uyghur Muslims.  Prosecutor General Toiviainen’s status as a European official must not shield her from sanctions for her abuse of traditionalist Christians in Finland.

We therefore respectfully request that USCIRF call on U.S. Secretary of State Anthony Blinken to designate Prosecutor General Toiviainen under Section 7031(c), which requires the Secretary to deny visas to officials (and their family members) who have engaged in “a gross violation of human rights.”

We further request that USCIRF call on U.S. Secretary of Treasury Janet Yellen to designate Prosecutor General Toiviainen under the Global Magnitsky Act and related statutes.  Executive Order 13818 empowers the Secretary to designate and impose economic sanctions on individuals determined “to be responsible for or complicit in, or to have directly or indirectly engaged in, serious human rights abuse.”  Prosecutor General Toiviainen and any line prosecutors who choose to assist her plainly meet this description.

Finally, we note that there is no statute of limitations on human rights violations of this magnitude. Should calls by USCIRF to designate and sanction Prosecutor General Toiviainen and her accomplices fall on deaf ears, we respectfully request that USCIRF not simply let the matter drop. We ask you to continue to press our government to use its legal powers and fulfill its duties under U.S. law to aid victims of human rights violations, including Dr. Päivi Räsänen and Bishop Juhana Pohjola. We further ask USCIRF to take account of the violation of human rights by the Finnish Prosecutor General in its assessment of the state of religious freedom in nations around the globe in its Annual Report.

(Institutional affiliations are for identification.)

Biden Hopes You Forget His War on US Energy Producers

The Changing Shape of the Inflation Problem

When Will Joe Biden Start Using His Clemency Powers?