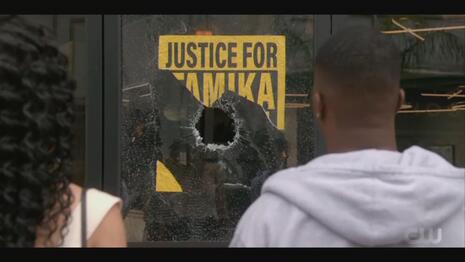 At this point, the CW should really consider changing the name of their sports drama All American to All Propaganda. This is the fourth week the show has shoved a pro-BLM, anti-cop narrative down our throats, but now America as a whole, as well as those who support the police, are getting thrown into the blame game, as they claimed America has always been against black people – “They just ain’t hidin’ it no more.” Even worse, they depicted the police as literally stalking and hunting a black person, likely so the show could convince us of the narrative they pushed last week – that police are out to “hunt” black people.

On Monday’s episode “Bring the Noise,” Spencer (Daniel Ezra) and Olivia (Samantha Logan) find themselves on the news for their parts in trying to get justice for an innocent, young, black woman, Tamika Pratt, who was shot and killed by a racist police officer. The TV reporter announces that the two are “being dubbed the face of a new movement.”

Spencer is being recognized because he rallied his football team to forfeit their chance at the championships by taking a knee at their playoff game, at which point the other team did the same. We find out in this episode that every team in their division followed suit, so they actually get their chance at the championship, after all. (Which sends a confusing message. I thought this was supposed to be a racist country that’s been against black people from the start, according to their narrative. So, why would every team join them in their protest?)

Olivia is being recognized for stealing the bodycam footage of the shooting from her mother, who is the D.A., and releasing it to the public. Soon, the two become double victims, once for being black, and twice for standing up for Tamika in a supposedly racist America. Not only are they getting hate online, but the confrontations become public, too.

One white man tells them, “Those officers have families, you know. You’re ruining their lives,” which sends Olivia into a rage. “How can people be more upset with someone getting fired than a woman getting murdered?” she asks. Spencer replies, “A black woman, and are you really surprised?” He then suggests they keep their focus on their “black joy.” Liberal lesson number one – anyone who defends the police is like this racist caricature and they don’t care about black lives or their joy.

Later, Spencer gets a phone call that sends him and Olivia rushing downtown to find a hole broken through the window of their favorite café:

Asher: I was here when it happened. This guy came in, yelling about the “Black Lives Matter” poster, saying, “All lives matter,” demanding they take it down. About a minute after they kicked him out, a brick crashed through the window.

Spencer: If I wasn’t all over the news, this place woulda never been targeted.

Olivia: No, I’m the one who hung up the poster.

Asher: It’s neither of your fault. Don’t take the blame away from the guy who actually did it.

Get the point? Liberal lesson number two is that anyone who believes “all lives matter” is just an evil racist who would destroy public property in a violent matter. Oh wait…. isn’t that what BLM does? But, just in case you forgot the first liberal lesson, they made sure to drive that point home with yet another racist caricature:

Olivia: Damn nerve. I wish we were here when it happened.

Spencer: And what would you have done?

Olivia: Yelled at him, hit him. I don’t know. Why aren’t you more upset?

Spencer: I am, but you can’t control what other people do, Liv.

Olivia: I just–I feel like I’m just sitting on the sidelines of a fight that I started, when I should be out there, fighting. What, Gabby?

Gabby: I didn’t peg you guys as racists, but I guess I was wrong.

Gabby: Cops hate black people? That’s what you think, right? Forget they have a right to protect themselves? Hope your 15 seconds of fame was worth it.

Olivia: Did you even see the footage? They murdered Tamika!

Spencer: Wait. Stop! Stop! Walk away! I won’t be as nice as Liv! Stop!

Olivia: No! No! She can stay right here because I’m calling the cops!

Olivia: Why not? She just assaulted me! That bitch should be in jail!

Spencer: Your face is all over the news for getting’ cops fired! They ain’t on our side right now!

Olivia: What? So, what, what? We do nothing? What, we just sit here and we just accept that this is the country that we live in?

Spencer: It’s always been this country, LIV! They just ain’t hidin’ it no more. And what we do is hold our heads high regardless because our worth don’t come from them.

Again, mixed messages. Spencer says, “They ain’t on our side right now.” When the show claims they never were. And Olivia’s first instinct is to call the cops when everyone she knows and respects has depicted them as racists out to “hunt” black people and that the system cannot be fixed? Right. That’s liberal logic for you.

They saved the best for last, though. In case you might not be convinced that police officers are evil, racist predators, take a look at this scene where a vengeful cop stalks and harasses Olivia, then sends her a threatening signal with just one, single death stare:

Olivia: Mom, I think there’s a cop following me, but I didn’t do anything wrong.

Laura: Now, Liv, are you sure?

Olivia: Mom, wha–but what if—

Laura: Ok. It’s ok, honey. Tell me where you are. I’m coming to get you right now. Just send me your pin.

Enough already with the constant propaganda, All American. We get it. Despite the name of your show, you hate America. You hate the police. And you hate anyone who dares to believe that both black and blue lives matter.

This show is such a far cry from what America is really all about, as well as the vast majority of good police officers who sacrifice their lives to protect citizens every day. Wait… does defending good officers make me an evil racist now who’s suddenly going to want to throw a brick through a window, or maybe assault someone with a cold drink? #eyeroll

Conservatives Fight Back! This episode was sponsored by Colgate, Liberty Mutual, and Starbucks. Click each advertiser for their contact information so that you can let them know how you feel about this episode!

Waiting for Democrats to Condemn Lightfoot’s Racism, and Hearing Only Crickets

Is California dreaming becoming a reality?