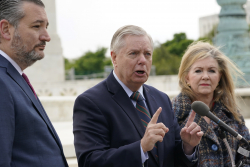 First-time heroin users, according to the substance abuse treatment center The Recovery Village, often “feel a rush of euphoria and a false sense of well-being,” but upon subsequent use that feeling “tends to dissipate or disappear altogether as someone develops a tolerance to heroin, and they may just use the drug as a way to avoid withdrawal, rather than feeling a true high.”

To the Republican Party, Donald Trump is heroin.

Using Trump the first time was euphoric. He picked the Electoral College lock and thwarted the presidential candidacy of the Republicans’ bête noire, Hillary Clinton. But that initial high has never been replicated. Using Trump in 2018 threw away the House. Using him in 2020 sacrificed the Senate and the White House.

In the four months since Trump supporters stormed the Capitol, his favorable rating in the NBC News poll dropped from 40% to 32%, yet Trump trounces all potential rivals in every 2024 Republican presidential primary poll. After Al Gore lost the controversial 2000 election while winning the popular vote, polls in early 2002 showed about a quarter of the his party wanted a rematch in 2004. Today, recent polls find Trump winning between 48% and 57% of the Republican primary vote, far outpacing any potential rival.

As he remains the party’s focal point, Republicans can now be divided into three categories: addicts, enablers and interventionists.

Those hoping to stage an intervention are very few. Leading that small faction is Rep. Liz Cheney, who was purged from her House leadership post for having the audacity to insist that the party ignore Trump’s delusions and accept that the 2020 election result was legitimate.

The addicts actively want him to continue to play a central role in the GOP, even if they know of the dangers. In a March interview with “Axios on HBO,” Sen. Lindsey Graham was disturbingly candid: “There’s something about Trump. There’s a dark side, and there’s some magic there. What I’m trying to do is just harness the magic. … He could make the Republican Party something that nobody else I know can make it. He can make it bigger. He can make it stronger. He can make it more diverse. And he also could destroy it.” Earlier this month when talking to Fox News’ Sean Hannity, Graham was even more insistent that the GOP should not quit Trump: “Can we move forward without President Trump? The answer is no.”

The enablers seem to understand the party should move beyond Trump, but aren’t willing to confront the addicts. Take Senate Minority Whip John Thune as an example He was recently asked by CNN about the House bill for a bipartisan commission to investigate the Jan. 6 attack on the Capitol. The proposal incorporated demands from the House Republican leadership that the commission give both parties an equal number of members and equivalent subpoena powers, but still did not win the support of the Republican leaders nor most House Republicans.

Aligning himself with the majority of House Republicans, Thune expressed concern that the commission’s findings “could be weaponized politically and drug into next year.” Thune further said, “I want our midterm message to be on the kinds of things that the American people are dealing with: that’s jobs and wages and the economy and national security, safe streets and strong borders — not re-litigating the 2020 elections. … Anything that gets us rehashing the 2020 elections, I think, is a day lost on being able to draw a contrast between us and the Democrats’ very radical left-wing agenda.”

Thune’s political logic is backwards. Turning the proposed commission into a point of partisan conflict has drawn more media attention to those Republicans who refuse to accept the legitimacy of Joe Biden’s victory, and away from the bread-and-butter issues most voters care about. Agreeing to the commission would have minimized the controversy around it, and created more media space for Republicans to battle Democrats over domestic and foreign policy differences.

But accepting the commission requires confronting the addicts. It requires acknowledgement that Trump and the rioters are the illegitimate actors, not Biden, not the secretaries of state, not the vote counters. It requires saying Trump’s protestations go beyond mere difference of opinion — they actively undermine our democracy. Thune did not do this. He made excuses for the addicts and justified their self-destructive behavior.

Conventional wisdom is that Republicans will take back the House in 2022. The president’s party almost always loses House seats and Republicans only need to net-gain five. Pollster Charles Franklin analyzed the shift in the House popular vote between presidential elections and midterm elections in the years since 1946, and estimated Democrats would lose 26 seats. That doesn’t account for House redistricting, which, according to Cook Political Report’s Dave Wasserman, could give Republicans up to eight additional seats.

But the estimate also doesn’t account for unpredictable party behavior between the presidential election and the midterms, or as Franklin put it, “Political skill or folly might shift the balance away from the models.” A party’s hearty embrace of a just-defeated one-term president with a 32% favorable rating should qualify as folly. It simply hasn’t happened before. We have no model to estimate the potential effect.

Of course, the possibility — maybe even the probability — exists that Republicans still take the House in 2022 as well as the Senate. That may not give them as powerful a dopamine hit as Trump’s presidential victory, but it could be enough of one to keep injecting Trump into their veins.

The unknown is whether losing in 2022 would represent the intervention from the voting public that Republicans couldn’t undertake themselves. If Republicans can’t net five House seats and one Senate seat, when the average midterm yields far more for the opposition party, then that might constitute the addict’s rock bottom.

The enablers better hope so.

‘Slow-Rolling Insurgency’; Reid, Pals Accuse All Conservatives of Being Terrorists

Lawmakers Should Avoid Impulse to Tax All Stock Trades