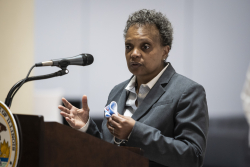 Is anyone truly surprised by the racist interview policy from Chicago Mayor Lori Lightfoot? As she reaches the midway point in her term, she decided that she would not be interviewed by white reporters. She will sit down and talk to white reporters in the future. But the damage is done.

Lightfoot stands at the intersection of the Chicago Way and the Woke Freeway that bisects the nation.

And to paraphrase the late Supreme Court Justice Louis Brandeis, if it is true that local governments are the laboratories of democracy, then what’s coming out of the Chicago laboratory, to be carried on the Woke Freeway to Washington, will be profoundly toxic to the health of our republic.

If you are surprised at Lightfoot then you haven’t been paying attention. She’s not about “equal opportunity.” She’s wedded to “equity,” which is the rationale used by the left to use government to reward some and punish others on the basis of race.

It is immoral and cancerous. You can dress it up in fancy academic talk about critical race theory and identity politics, but when you cut out the fat and get down to the bone, you’re left with one word: racism.

She’s isolated, politically desperate, with Chicago violence and other issues beyond her control, with a City Council that no longer respects her, and she is frantic to find a political base as she approaches a decision to run for a second term. And so, like other unscrupulous political actors before her, she plays the race card as a last refuge.

She bemoans the lack of racial diversity in the City Hall press corps and uses that as rationale to say she’ll only give interviews about her midterm anniversary — those sit-down, shallow, progress report interviews — to Black and brown reporters, but not white reporters who sought her out.

I agree that diversity in journalism is important. I wish there were more journalists of color. But focusing on color alone is simplistic and ripe for political manipulation.

The diversity I was taught by the Rev. Martin Luther King Jr. and others was about the diversity of the mind, of character, of thought. And we were taught that government using immutable characteristics such as race to take from some and reward others was morally offensive to an enlightened society.

“Many of them are smart and hardworking, savvy and skilled,” she wrote of white reporters in a letter, attempting to explain her policy after it blew up into a national news story. “But mostly white, nevertheless.”

Ask yourself what would happen if a white mayor wrote something like that about reporters of color. National outrage on every network, in every paper. Every news shop in town would be confronting the mayor’s party allies here and in Washington, sticking microphones in their faces, demanding that racism be addressed. Then would come the secondary media spin and anguished reaction from citizens, from journalism schools, from traumatized aspiring reporters.

It would never end until she stepped down.

But Lightfoot is not being asked to step down. She is not being condemned by her allies. There is hand-wringing, suggestions that she’s engaging in “tactics.” But all that obscures what’s happening.

Chicago is a one-party town where the people and politicians have been conditioned to bend to the whims of mayoral power. We’re expected to doff our caps, and when that backhand hits us right in the mouth, we’re expected to smile and say, “Thank you, may I have another?”

Whether Lightfoot truly espouses racist views and is advancing inner demons long held in check — or whether she’s a cynical manipulator furthering her political career — is an open question.

During her campaign she’d sit for interviews with me and talk on my podcast, “The Chicago Way” and give me hugs at parties. Now that she doesn’t want to sit down for a midterm interview with reporters like me, I’m relieved. I find such staged interviews to be shallow and useless anyway.

But am I hurt? No. As a journalist, I study politicians. And it has been amazing to see her transform, like a flower, into Chicago’s toxic blossom.

She’s made her calculations, doubling down to change the subject from her failing record, herding journalists into discussions of race and diversity in newsrooms, and using it to bind them to her. As if she runs the media companies, not the city.

She’d rather do that than deal with real issues that plague Chicago.

If what she says is accepted, as it has been by the Democratic Party, the Chicago virus will advance along the Woke Freeway to Washington, and the idea will get reinforced: It’s OK to reward and punish people based on racial identity.

If she becomes a model of what is acceptable, and there isn’t greater backlash to what Lightfoot decided in this moment, where does it end?

In my own hyperlocal laboratory here with my keyboard and phone, I conducted my own experiment from the time Lightfoot’s racist commentary became public in a tweet by WMAQ-Ch. 5 political reporter Mary Ann Ahern.

I listened for reporters to be asking hard questions of Lightfoot’s fellow Democrats, if they supported access to elected politicians based on racial lines.

Five Oregon counties vote in favor of “seceding” from the state

I Taught Online School This Year. It Was a Disgrace.

Remote learning needs to end with the pandemic. Source link